Gazing out from a coffee shop window I see a young man knelt down by the trash can wearing a tinfoil sleeveless poncho. His bare arm reached into the trash and pulled out a half consumed container of food. He places this is in one of his plastic bags and seemingly walked to the next treasure chest for urban foraged food.

A Middle Aged man asks me to watch over his belongings as I drink a coffee. His laptop, headphones and bag sit on the table for ages. He has entrusted me, a stranger with several thousands of pounds of goods. I watch like an obedient guard dog for over 15 minutes and start to consider where he is and then a dark thought passes over me.

Keeping one eye on the man’s belongings and my other eye is distracted by another man checking on the same trash can but walks away empty handed. The man who’s belongings I have been guarding returns and says thanks for that. My dark thought disappeared as my fleeting responsibility dissolved.

Previous to these observations we walked down a street in Victoria and were avoiding the smoke a young woman produced while she dragged away on two roll ups, one tobacco and one of weed. On the same street a female beggar was asking for money, I replied in a kind voice (I thought) ‘sorry’ but she replied instantly ‘bullshit’. We are certainly in an urban landscape, where a blend of people co exist in a relatively small and peaceful city but these are reminders of how as people we are existing in unparalleled worlds.

It as if I am seeing western cities as I’ve never seen them before. Living in London we perhaps got used to the mayhem and the corrosive nature of living standards. We had also just spent 18 days on a road trip with our great friends. Where the animal kingdom and raw nature took command, so coming back to a city can awake your senses once again. Before these experience where felt we were away on a big road trip (see below).

We were in the great company of Silvia and Duane in Victoria, who had welcomed us into their beautiful and warm home. As we stepped foot into their house we were a gasp and excited to be in a real home. A home that displayed mementos of their travels. It was a cartography of objects and memories, one that fascinated us.

We had met Silvia in August 2017 in Uzbekistan and numerous places along the way which we happened to keep bumping into each other. We spent many days sightseeing, sharing food and chatting. Silvia in fact helped me with an illness I had as she was fortunately a doctor in Canada. We had never thought we’d see each other so soon. But as soon as we knew we’d be taking a cruise to Canada we had to visit.

Our short stay was fantastic company with cider, meals, walks, chatting and laughter, we were spoilt Even Duane’s father gave Barbara home baked sourdough bread as she charmed him with her passion for the floured food. On their kitchen wall hung a beautiful, industrial and stark photograph of enormous pipes running through the forest. Duane asked us to look closely and guess on the materials and their use. Metal, no wood, yes wooden panels crafted into 3m (diameter) pipes that ran for 10 kilometres to a mill. Our paper project brings up yet another connection. Duane, a photographer had captured this unique industrial archive on a field trip and there we were all discussing it in their Kitchen. The mill and grounds now owned by Catalyst (as Powell River) sited on Vancouver Island, near Campbell river, Canada. Oh and Silvia gave me a good haircut.

Our bikes and access luggage were stored in the basement. We told our bikes ‘enjoy the rest and we will collect you in a few weeks time’, as Silvia and Duane drove us to Sidney (ferry terminal) where we were to be collected in another car to begin our 18 days road trip with Tracey & Sarah. The last time we’d seen them was over 12 months ago in Croatia, as we celebrated Trace’s 50th in style. Huge hugs and welcomes as the 6 of us sat down for a light lunch in a local cafe. Within minutes it was if we’d only just seen them, not a year ago. With one hello we said goodbye to S&D and the 4 of us headed out on our first stop, Tofino (Pacific rim, west coast Vancouver). 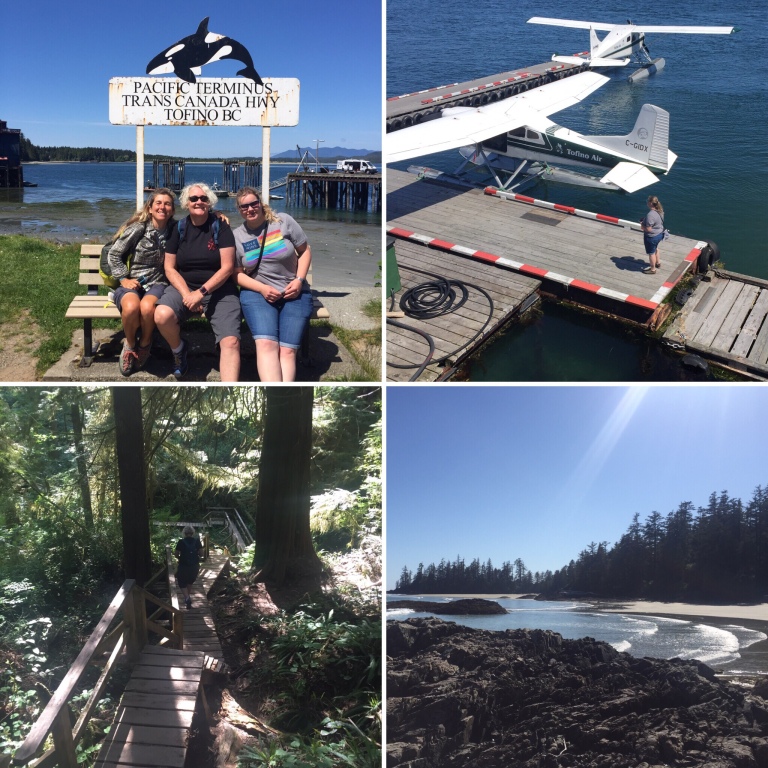 Our road trip was excellent, we saw so many places and got to see wildlife from the safety of the car. But we did struggle with the impact of car travel. We were both experiencing aches and pains from seating for so long. The speed of car travel came as a shock. Remember our average speed on a bicycle maybe 10 mph not 60-80mph. Things passed us by with views from the side window. We were grateful to be driven around and spend time with our friends from home.

Tofino had stunning, wild beaches with drift wood in abundance. Bold eagles gliding overhead and ancient forests. We took a water taxi to Meares island to view the enormous and majestic old cedar trees. These spanned 1,500-2,000 years old! Their old bark thick, twisted and overflowing with character. We walked lots on beaches and trails. This is when we saw our first black bear. The 4 of us chatting away when Sarah calmly with some tone of panic “bear, bear”. Where? 12 o’clock, by the tree! Yes I see it as it began to turn it’s big black furry back away from us and head into the thicker forest. Our hearts where racing but as we returned back to the car we were filled with excitement for seeing our first bear. So if I told you we returned to that trail several hours later to see if we could see it, would you believe us? Yes, it was slightly mad, as the 4 of us returned to the trail and almost at the same spot we saw the bear again, this time clawing a tree. I think we all agreed a slightly different points we should return back to the car and not do that again!

Our next destination was back along the Sunshine Coast and we stayed in 2 different places. My favourite Ruby Lake where we stayed in safari tents in the woods. Here I saw a beaver crashing its tail into the water as a protest to maybe another beaver or animal. It was a privilege to watch it slide through the still lake. The sighting of fresh bear pooh was less exhilarating. I had did a little bear pooh research online before the trip so I could be aware of signs!

We knew our old cruise/cycling friends (Chris & Dea) where in the area and managed to meet up outside a library off the main highway. This would be the last time we might meet again in the same continent. We drove off waving them goodbye and looked forward to seeing them back in Europe one day.

Our main destination was the Rockies, a long, 2 days trip but my, how breathtaking the drive was. Almost every inch of the way where landscapes to die for. Towering snow capped ranges and peaks. Lakes and rivers all overflowing from the melting winter snow. This is where nature rules. Wildlife everywhere and vistas of perfect picture postcard quality. 360 degrees of heaven. On one day in Jasper national park we were drunk from the amount of bears we’d seen, both black and grizzlies. We had seen 7 bears in 1 day. A mother and 3 cubs, who had claimed a tree and each picked a branch to sleep on, a grizzly a sleep in the woods after a binge on dandelions. Bear are often seen by the verge as this is where the dandelion are growing, a food of choice in spring. Some of of bear encounters brought about a slightly sour taste though as numerous tourists acted rather foolishly as they ran close to a grizzly trying to get that perfect picture. Never approach or run towards a grizzly, as I told a women who’s two young sons ran and got very close to a walking bear. We decided we didn’t want to be part of the human zoo and drove off this is when we saw the mother and cubs all to ourselves from the car.

The most outstanding and noted as one of the world’s most beautiful drives, Parkway Icefield was a non stop treasure trove of spectacular scenery. Our road trip continued to Banff and Golden areas, all idyllic with the most incredible hues of turquoise and green lakes. In Golden we stayed on a buffalo ranch, where we got to see the herd of 20+ buffalo right next to our accommodation. Sometimes you’d hear their grunts or horns scrap against the barn wall. Chester junior was the chief and at only 6, not yet in his official prime he was one handsome and formidable buffalo. Our barn was rustic and unique, partial walls and partial net screens, we were sleeping almost outside but with luxuries of a bed. No electricity or running water the 4 of us loved it and with the buffaloes nearby we were experiencing something very special.

Our 18 days flew by and in no time we were driving back to Vancouver. We had spent a magical time with the girls and had the fortune to see the natural beauty of the Rockies and all that inhabit it. As Sarah raced down the highway after lots of traffic stalled us, we had 5 mins left before the 5pm ferry back to Victoria departed. There was little time for emotional farewells as we grabbed our bike bags and ran. We were the last foot passengers boarding as the crew closed the doors behind us. We sat down bags around us as the ferry pulled away.

Silvia was waiting for us on the other side and within 30 minutes we were back in her home. Supper, conversations and bed, heads and bodies twitching from the travel.

We had 4 days to rewind, process and restore as we house sat, as Silvia and Duane where away. Their generosity in allowing us free range in their home was perfect. Victoria is a lovely place, surrounded by sea, parks and a gentle city vibe. We totally enjoyed this special time and this enabled us to get ready for our final cycle chapter.

Our next and perhaps final stage in this cycle adventure will begin in Port Angeles, Washington state and head down the west coast through Washington, Oregon and finally California, but that may all change too. We know we have to be out of the US by 9th September as the visa waiver is up then. 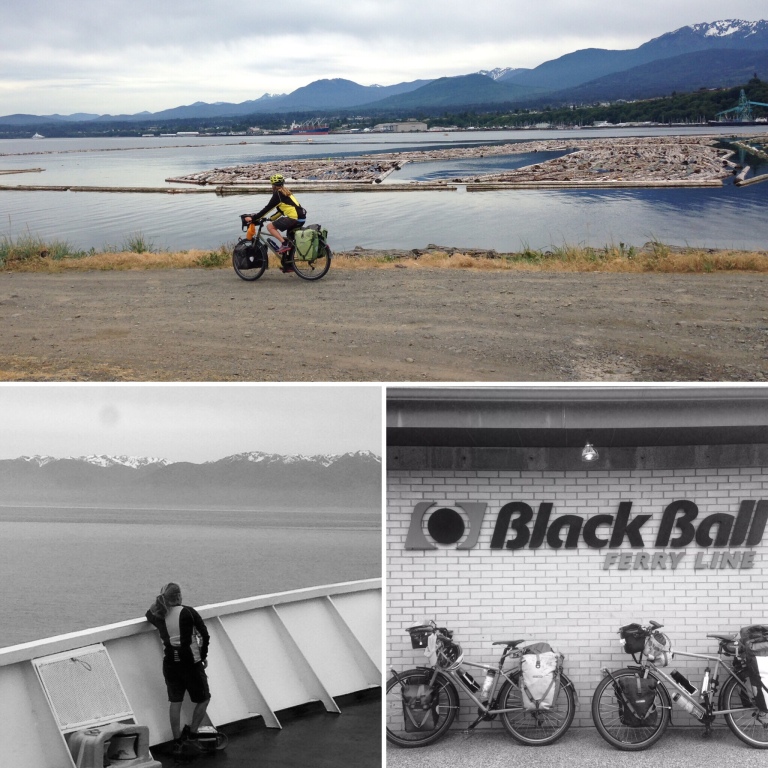