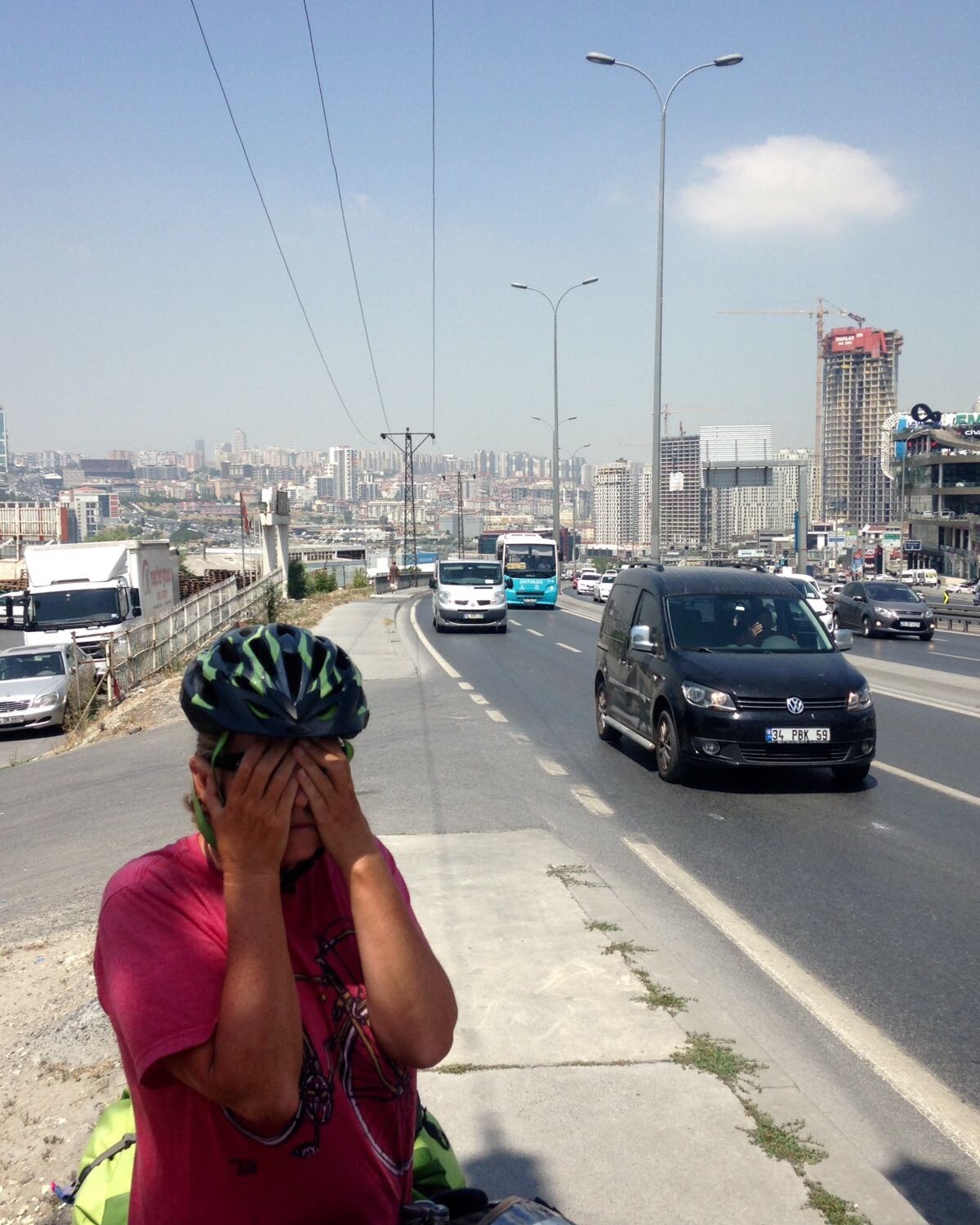 The highway from Greece took us through a tight security border with armed military guarding both ends of the bridge that divided both lands. Halfway across the bridge we meet 2 cyclists from the Czech Republic who were on their way home after 14 months travelling, but we were asked by a military personnel to move on as we both needed to make a border crossing! Enormous red Turkish flags marked the way and even now these flags dominate the land. We both went through 3 different checkpoints and felt a slight anxiety as this was not in our plans to travel through Turkey, due to warnings from friends, media coverage and in grained fear that can sometimes create prejudices.

Four and a half days of tough cycling (along the D110 -D100) covering 300km tested our stamina and mental will power. The road has been no picnic, a main road shared with every vehicle travelling at 80kmph but thankfully all of the D110 had a wide hard shoulder which had been our safety blanket until the road changed to D100 and with this the hard shoulder intermediately disappeared and reappeared. Being a main artery the landscape did not offer great rewards apart from glorious sunflower fields. The road cut through arable land, undulating terrain and major road woks where the road was being replaced. This was a blessing for us as we could escape into either the cut up road or the ride on the fresh tarmac where no others had access to. We would not have guessed how satisfying a petrol station would be. These became a godsend as they are well equipped, welcoming and offer shade as well as food. On one occasion a petrol attendant came out and gave us cold apricots as we took a rest from the road and sun. On another occasion the kindness of a motorist surprised us as they pulled ahead of us and a man got out and handed us a large bottle of water as his partner and child waved and smiled to us. It’s this small gestures that have warmed us.
Our journey to Istanbul has not been really enjoyable and it would not be a place we would come back to cycle in. On most tough days in other parts there have been many surprising rewards but even the nights have been tough here. Accommodation has been rough and difficult to find a descent place. When we did find camping options on the coast this was shocking. Campsites reminded us of homeless-camps and the one we ended up in as there were no further ones was unkempt, full of rubbish and dirty. We met a fellow traveller (motorcyclist) Jamil, from the Lebanon who was the only other traveller we met or saw since the border.
The outskirts of Istanbul spread far as many other large cities, but the concrete cloud of old and new structures hit us from 35km out. The roads became a tangled webb unfit for people outside of the metal skin of their cars. We walked across a bridge, we pushed up a steep hill and sweaty and swore like crazy women. Confused and dazed we picked our way through the madness and said right let’s find a place to hide.
The great thing about travel is you don’t know what will happen or where you will end up but you know something will work out. A tall building raised its ugly head and we headed for the corporate hotel. Walking in with Lycra shorts a sweaty t-shirt and looking slightly exhausted we were greeted with a welcome. Our bikes were safely parked in the ballroom and we spent 2 nights in heaven. We swam in the pool, ate good food and recharged from the 23rd floor for a cheaper price than a bad hotel 3 days before.
The last 35km into the heart of Istanbul was a much as we anticipated, busy, not cycle friendly but we picked our way through pathways, side roads, in elevators and we even found a blue cycle path. The madness of the city almost cracked us but once we threaded our way through the backstreets we found Balat/Fener neighbourhood and Mustafa greeted us with his Italian and Turkish run through of the studio which has become our resting place during our 6 day stay here until we head on the long distance bus to Georgia. Now to be tourists and rest the legs and give our bikes a well deserved break. 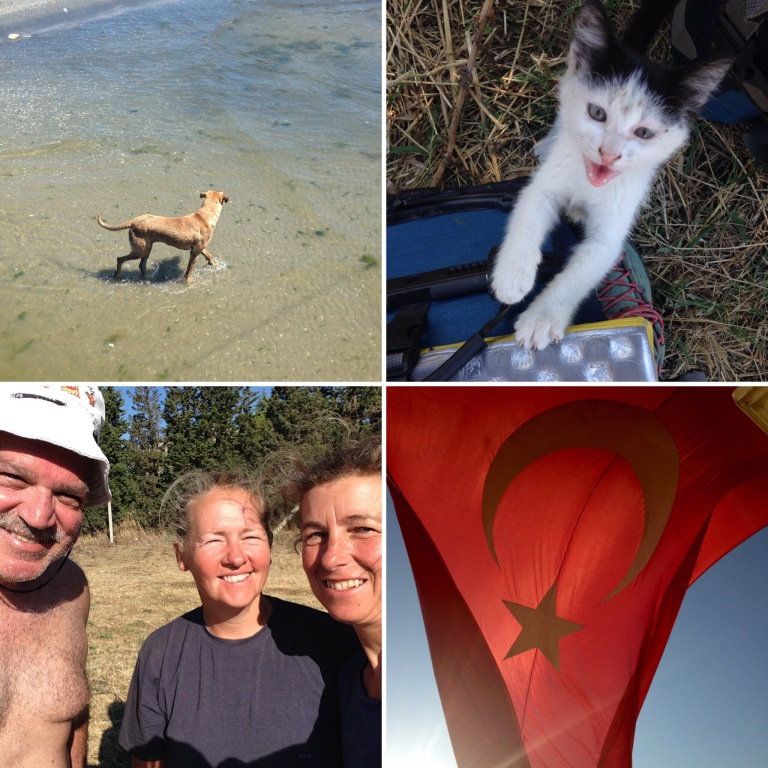 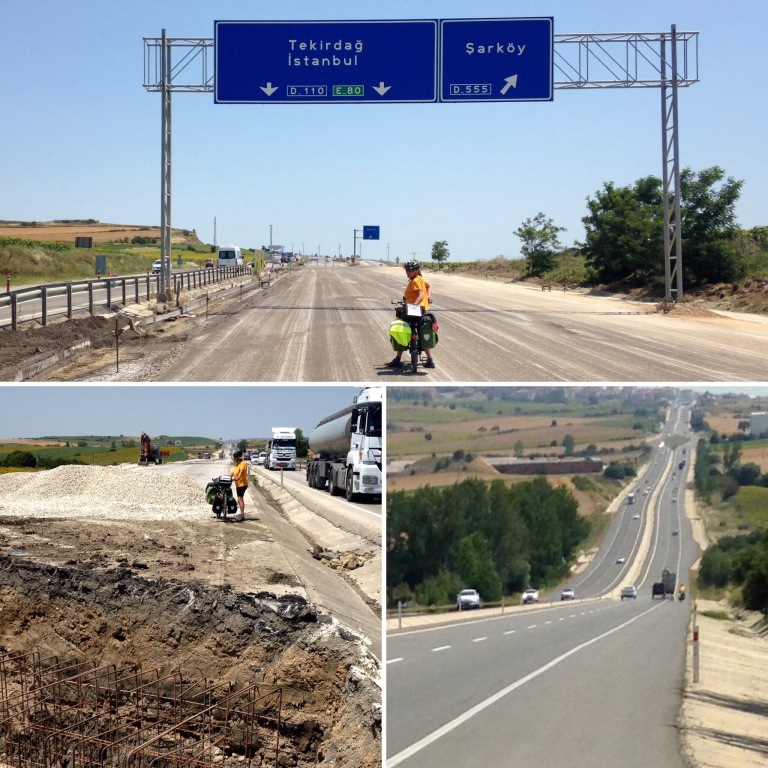 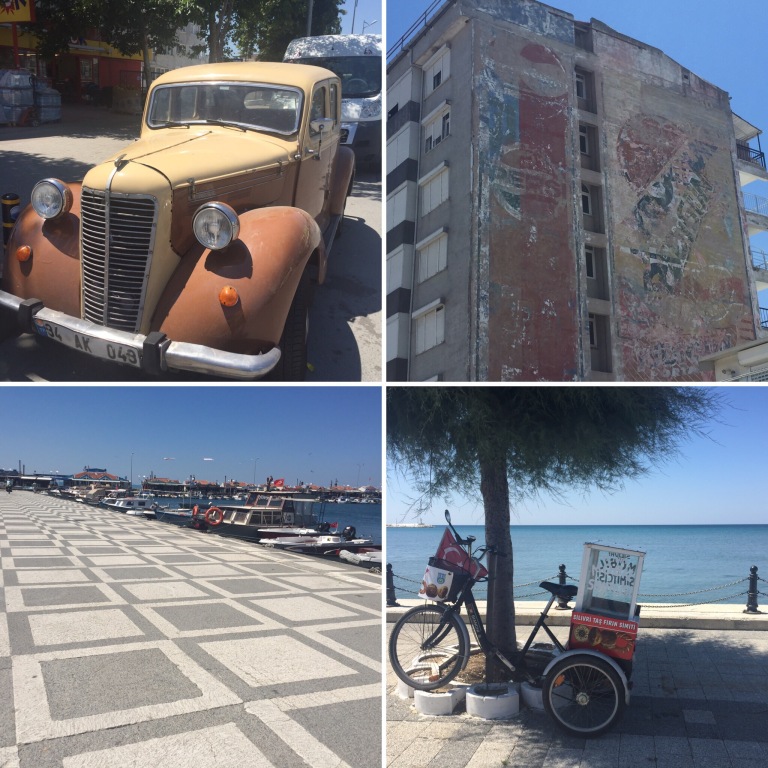 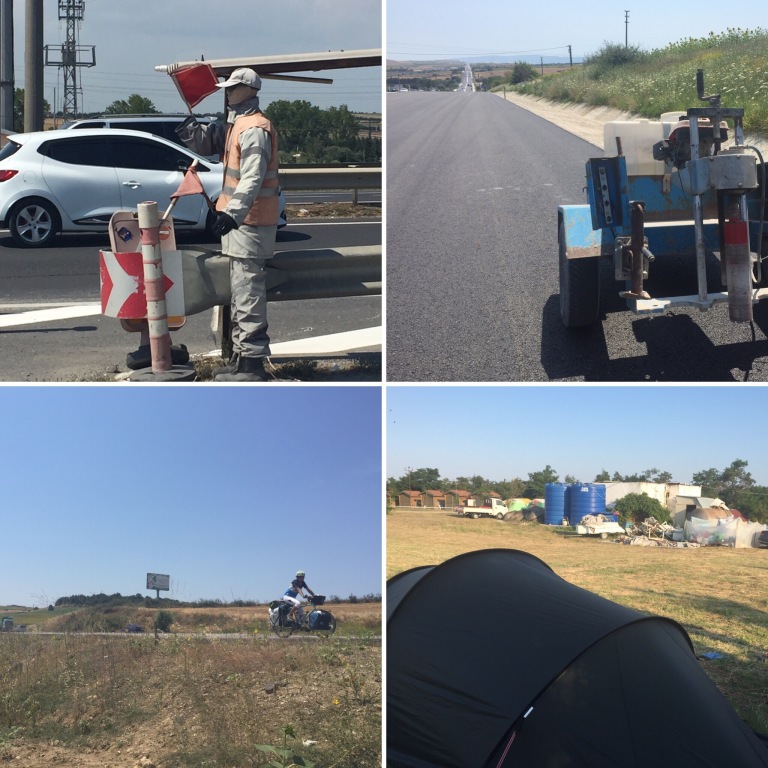 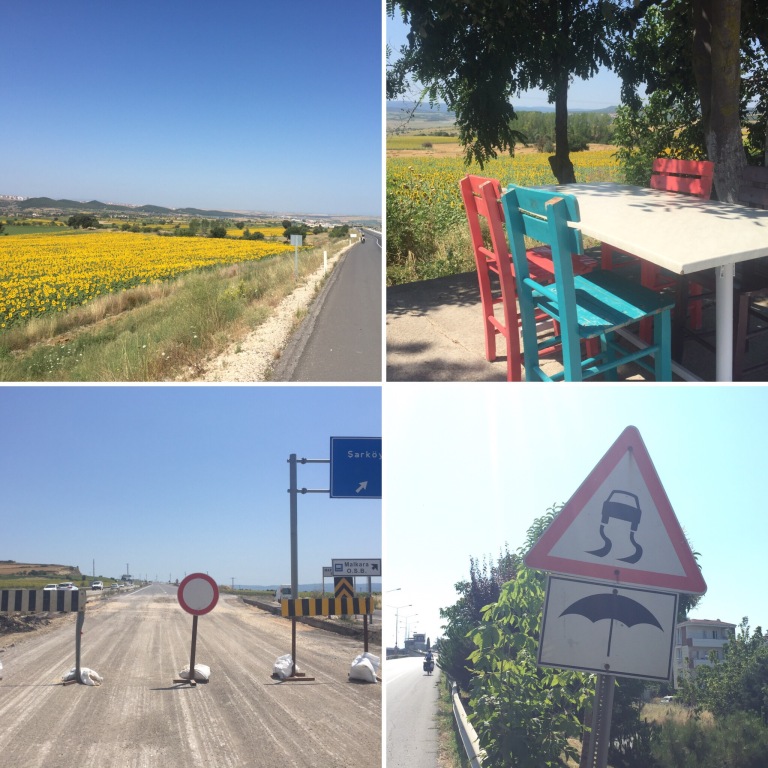 All photographs of from our 5 day cycle from Greece to Instanbul. Tough highways and the odd rest bite.

4 thoughts on “Not in our plans (Turkey)”