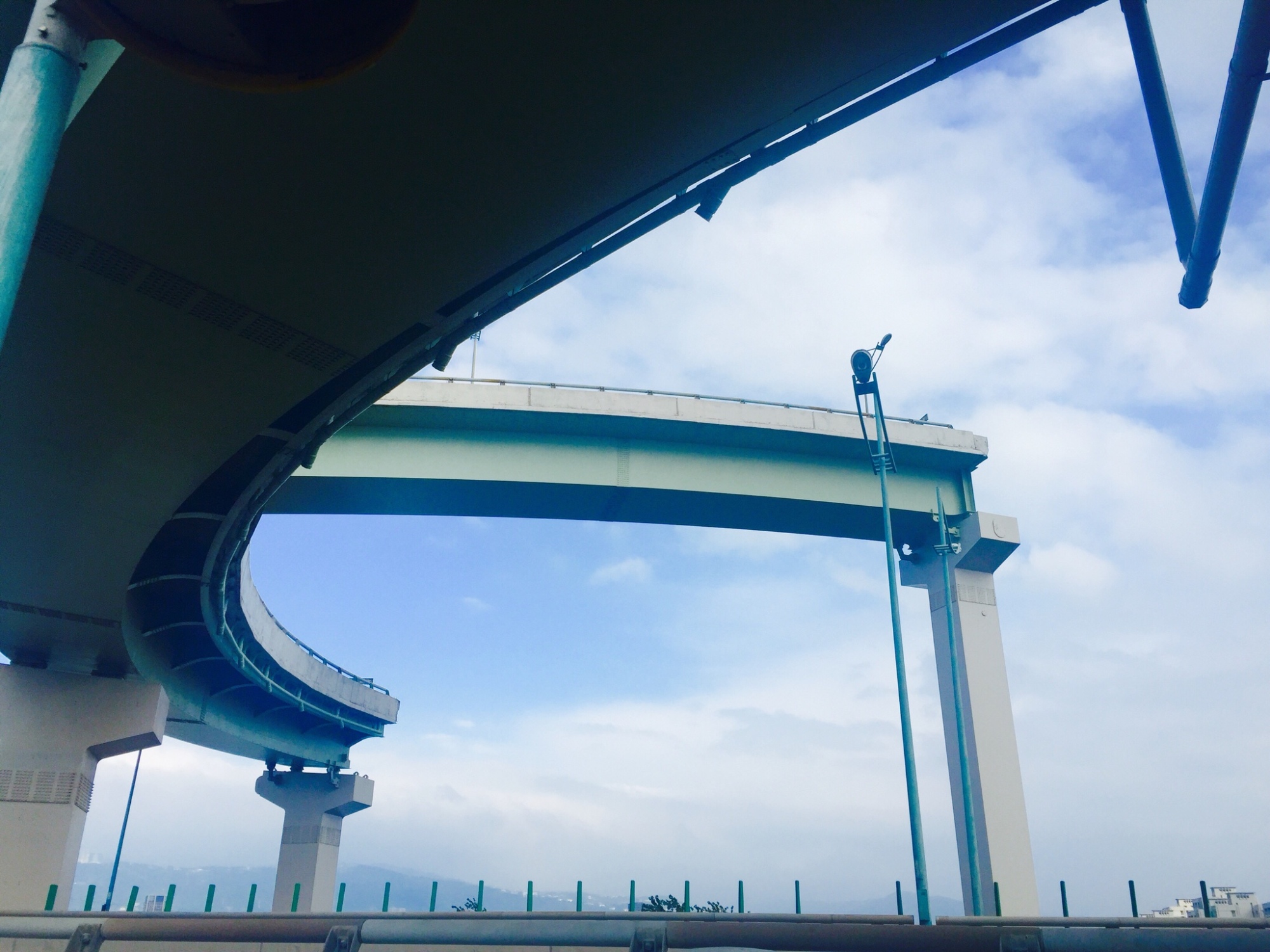 I know I’m tired. Not really from the cycling but from current travelling cultural, social and language barriers. I’m snappy and my patience for the Chinese way of doing things has tested me. I know patience has not been one of my attributes but there have been many tests and conflicts within. I hoped during my travels. I would somehow become more tolerant and laid back but there have been times that I have shown a rather spikey side. This is why I know I’m tired. We get days and time out to rest but maybe never quite enough to switch off and not be thrown into the next route or place to stay.

China has recently been hard work. When we cycle it’s freedom. There is a fluidity a sense of lightness and simplicity. You move slowly and gently. You stop to get your breathe back, admire the vista or greet locals. Hunger forces you to stop to refuel at a local eatery. Light fades and either the legs or backside tell you it’s time to rest as we start to look for a camping spot and set up home for the night. You are at tune with what you physically and mentally require. It’s back to raw basics and this is when I’m at my happiest and most liberated.(Images below from Christmas in Yangshuo). 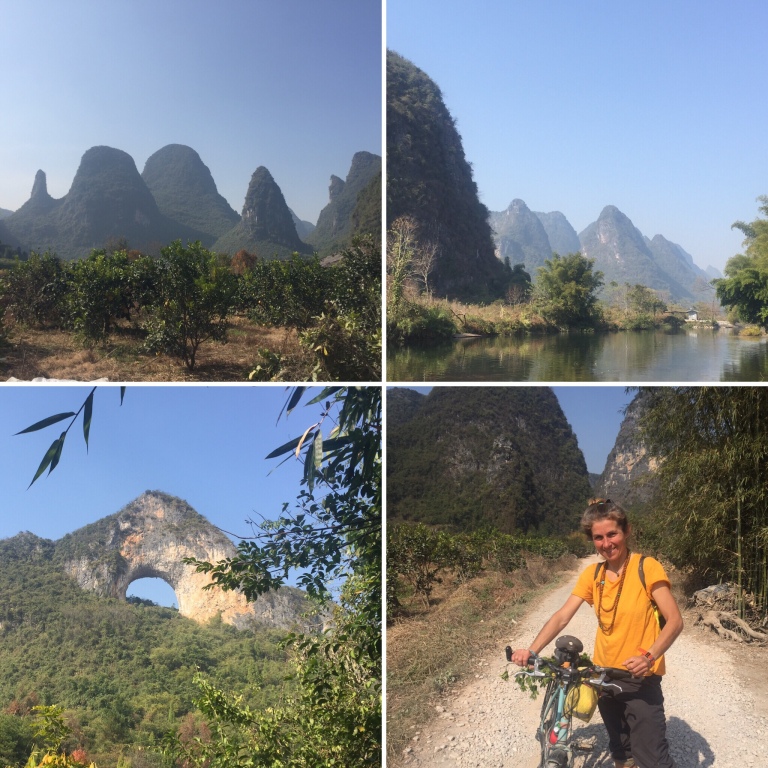 Then on the other hand cities in China are vast, noisy and full of concrete spaghetti! They often tend to shrink me, I feel a heavyness and the complexity can be overwhelming. The last 24 hrs have been frustrating. People don’t seem to know their city, travel infrastructure even ticket officers don’t know destinations. We cycled 20km across China’s 3rd largest city (Guangzhou) to book tickets for the coach. I had the translation prepared only to be ushered away saying no buses went to there! The urge to cry came over me and I wanted to escape claustrophobia from the city but my fighter attribute kicked in and I returned to another part of the station and found a station helper. She spoke some English and was very helpful. She phoned the driver to check we could be let out at Xiamen and took me to another counter to purchase the tickets. I wanted to hug her. I never thought we’d have taken so much Chinese public transport but the size of China is vast and impenetrable. We are thankful to those Chinese drivers who helped us on the buses and train station staff who forwarded our bikes safely.

There have been some truly outstanding moments and places which on reflection are due to the solitude and peacefulness of both place and people. Grassland, wetlands, Tibetan people, pilgrims, monasteries, landscapes, forests, mountain passes, vegaterain food, karst hills and wild camping have been some highlights. Our Christmas treat in Yangshuo was excellent and breathtaking scenery ( below images). 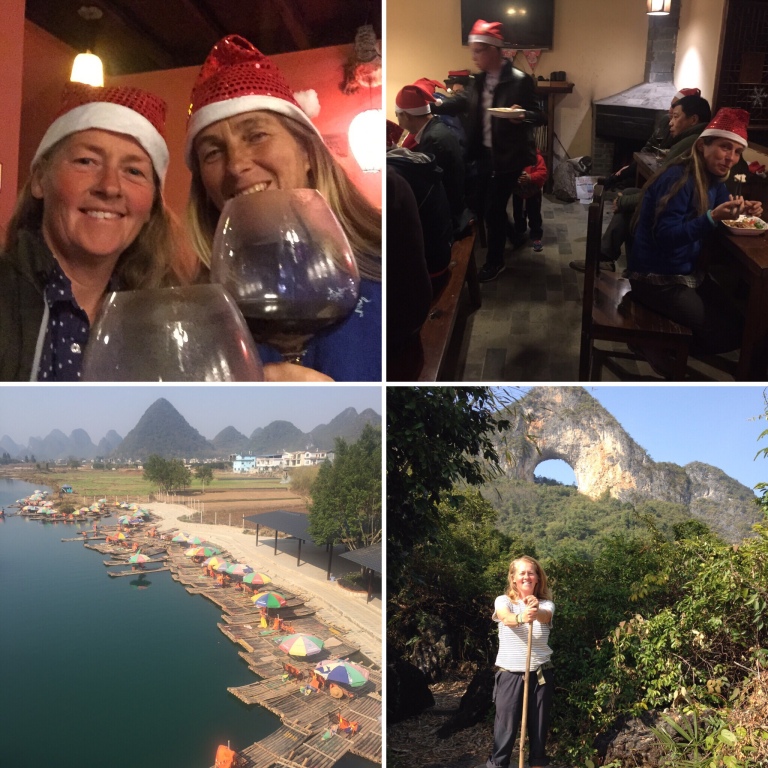 We never caught that bus. We were turned away as we tried to load our bikes into the hull. 2 rather aggressive men refused our bikes and no matter the approach we took from pleading to slight anger nothing worked. People crowded around us finding it funny that we were upset. I typed (into google translator) ‘please let us on as it’s my birthday tomorrow’. This didn’t work either. A full refund was given to us but 9.30pm we were stranded still in this city! Riding around looking for a hotel that was acceptable turned out to take a while but by 11pm we were in a nice hotel as B treated us to try and save something for my Birthday.

Waking up I felt frozen. Mentally I was in pain, my body stopped me going any further. Not because I was officially old (again) but because I couldn’t see a way out and honestly we wanted out. There were several ways but each was complex and we had too far to cycle before the visas ran out. The ferry option to Taiwan was still uncertain. Surely we shouldn’t be so unhappy and frustrated, we should be in control of this.

It really wasn’t what we wanted to do but it seemed the most logical and quickest way. We booked flights to Taipei and almost instantly we felt relief. I celebrated my day with an ice cream float in the day and a beer at night.

Luck was moving in our direction as we found bike boxes, packing materials relatively easily. Barbara did a great job of dissembling both bikes (I was the assistant holder of screws/bolts and the mud scraper). In 3-4 hours our bikes were in many parts, boxed and ready to go. We spent time researching weight limits, costs to take boxes bikes on plane as extra luggage and weighing our panniers on a bathroom scale. 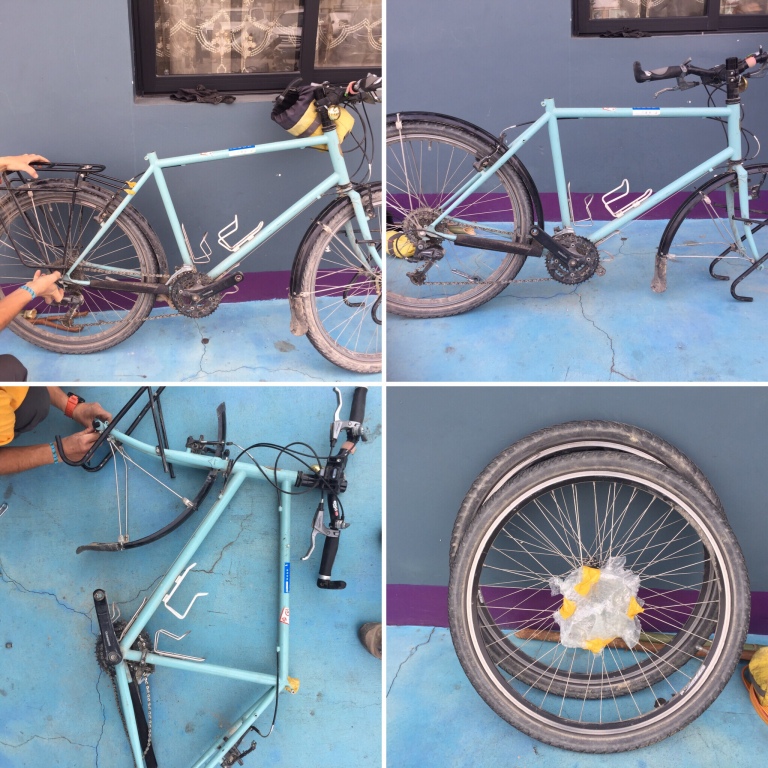 We took a taxi van to the airport and as we queued to check in I could see the airline staff querying our boxes. Please no more rejections. Someone was looking out for us and our good fortune continued, we checked everything in with no hassle and no extra costs.

The exit stamp from immigration sounded sweet as we were now on our way to a new country. China has been incredible in so many ways and we are so glad we traveled here but after 80 days it was certainly time to say goodbye. 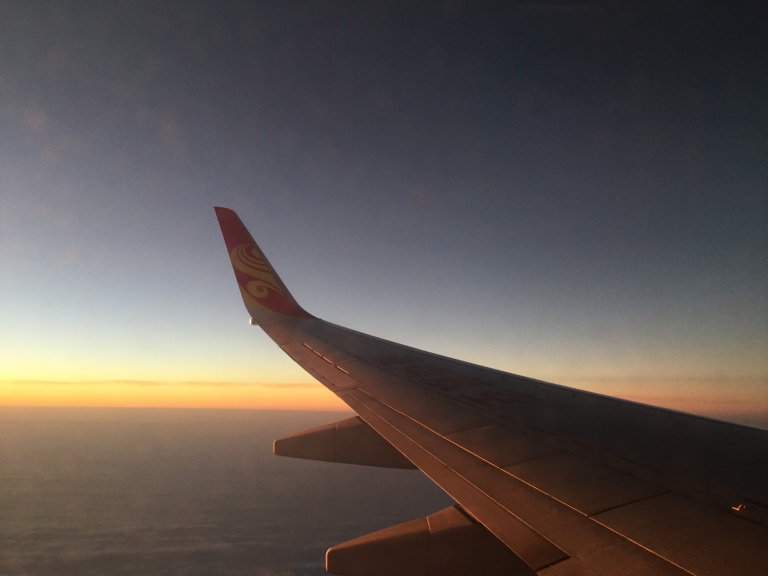 We approached the information desk at Taipei airport and were handed a booklet on cycling Taiwan. The lady directed us to a quiet spot for the night as she agreed we should stay here until morning. Oh my it felt so different already. So, New Year’s Eve at arrivals lounge, we began to put the bikes back piece by piece, which took a lot longer than dismantling them. Only 1 screw didn’t go back (mudguard) and a plastic tie did the trick. 2 beers, live video feed of Hong Kong fireworks and 2018 was welcomed in. No sleep was had but we were ready to leave by morning. 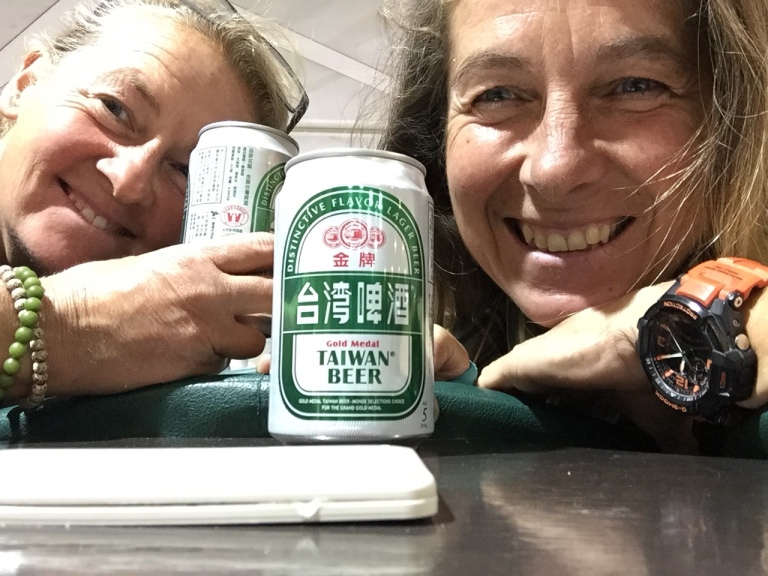 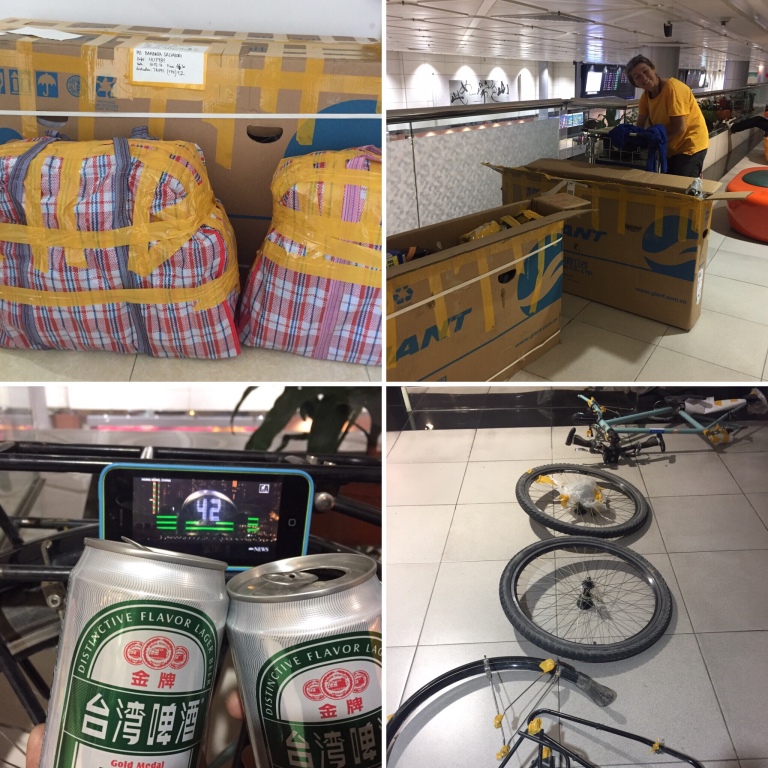 We discovered in the morning as security staff followed us that you are not permitted to walk or cycle until the boundary of the airport, which on reflection is a design and planning error. A taxi van took us to cargo section and we were now cycling in Taiwan.

Instantly cycle signs greeted us as we pedalled along the coast road and along the river backs which turned into cycle paths. Entering Taipei was easy as there were several designated cycle paths and information dotted around.

We ate a lunch of seafood rice pie and veggie pizza, which was heaven. People chatted and welcomed us to Taiwan, cyclists gave us thumbs up and the place was a buzz with Rapha (yes Rapha) lycra clad cyclists to rented bikers on New Year’s Day. 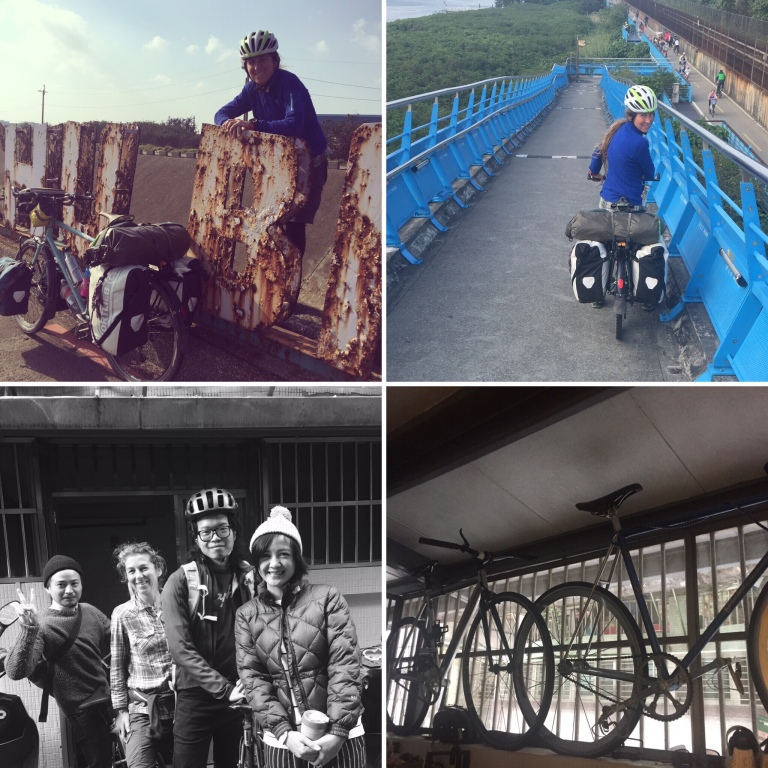 We stayed our first night with our first warm showers hosts (Ann An & Tsai) in Neihu district. 5 young people shared the cycling inhabited flat. They were welcoming, chatty and gave us ample information. Their living room floor was welcomed and a hot shower taken. We shared a supper and breakfast out together and the next day began our north east coast ride. (Images below show our first few dAys cycling in mixed weather). 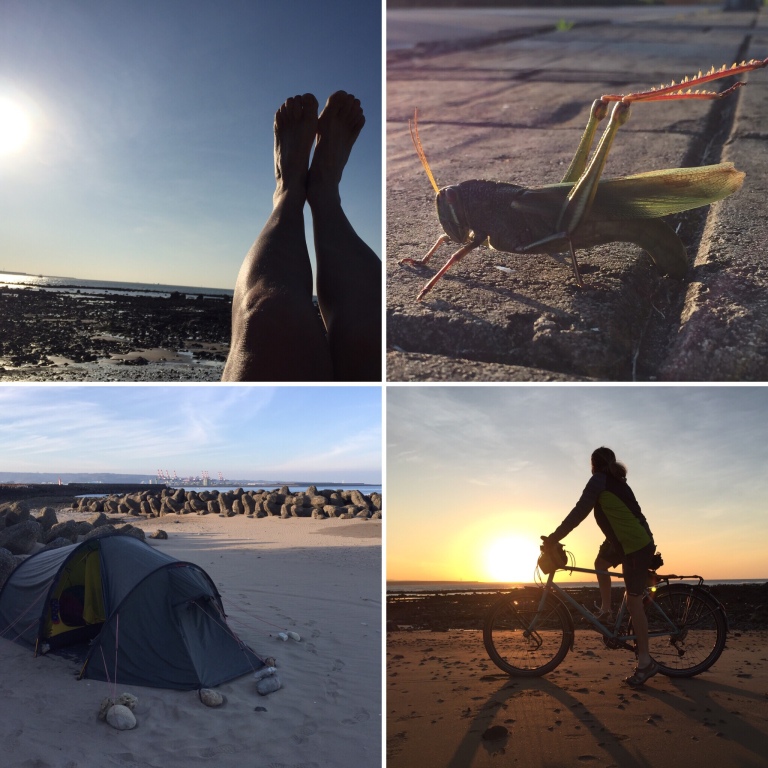 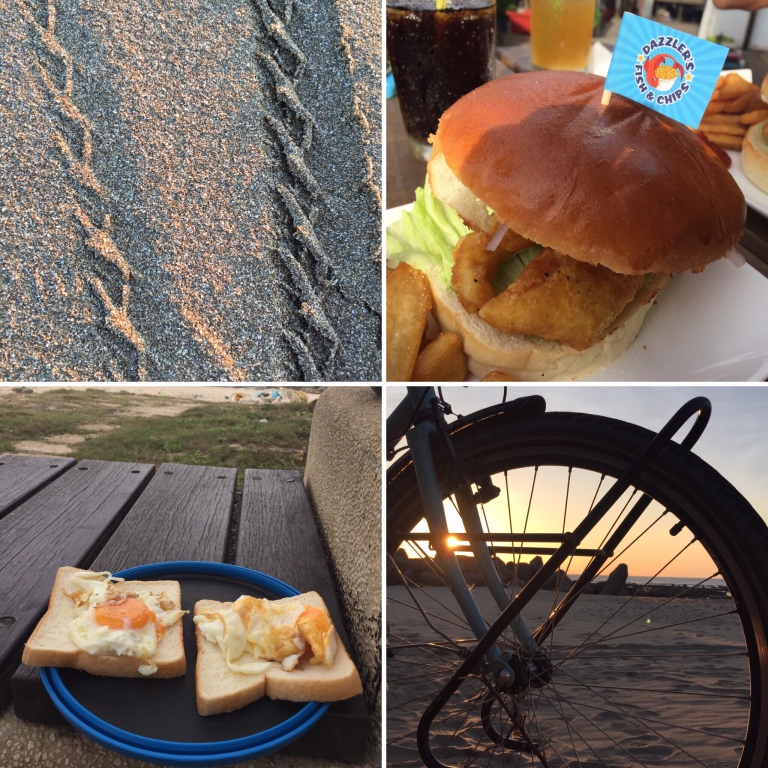 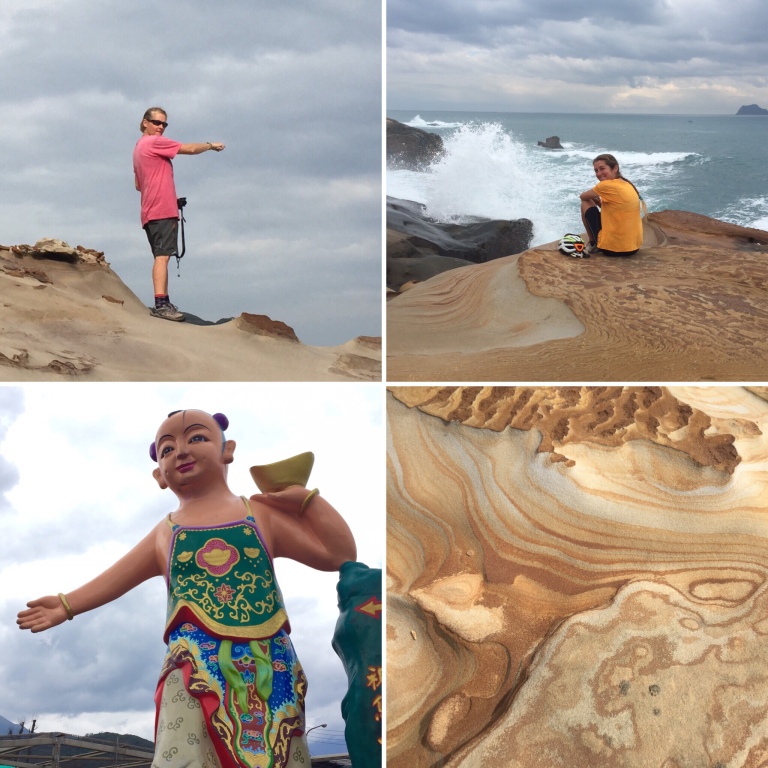 Taiwan is a breath of fresh air. We plan 6 weeks here and are treating it as a holiday no mileage and vast distances to cover each day. We are looking forward to discovering this sub & tropical island in winter, even though it’s raining! Our 2018 plans will take us into Japan until late April and then…

4 thoughts on “One road closes, another one opens”