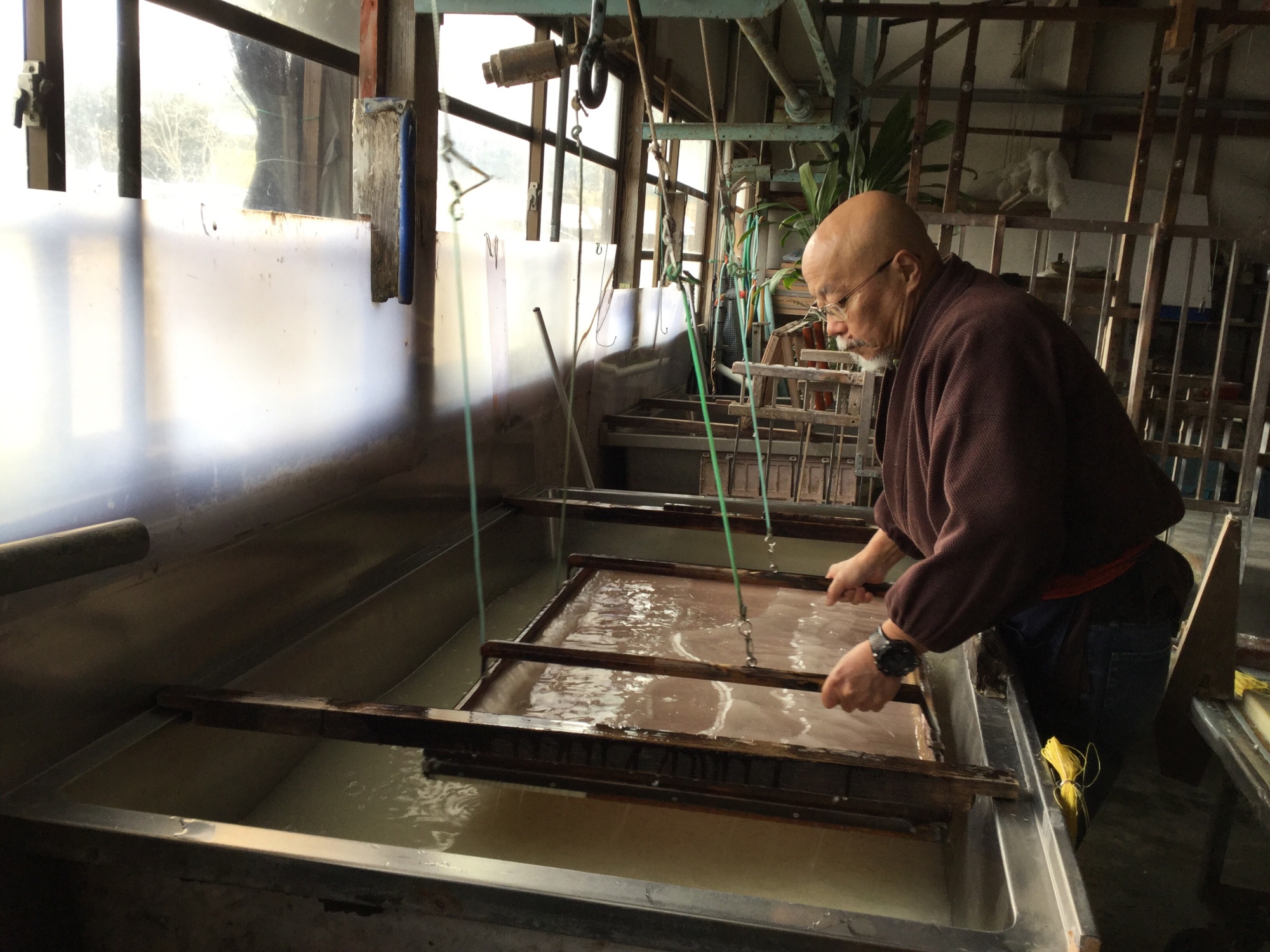 Our paper road journey has continued into Japan, where paper is embedded in everyday life. The skills and knowledge have been passed down from generation to generation and it is evident that paper is a fabric of Japanese culture and values. Paper was introduced in Japan through China via a Buddhist Monk from Korea and has been a traditional practice for over 1300 years. However, you can find all the history online so we will highlight our visits in this post and not bore you with too much.

It’s been a while since we posted any paper related information. It’s not that we haven’t been busy, in fact we have 4 visits to summarise in this post. Japan is awash with papermakers and we have had to be selective, as we can not see them all. Our cycling journey began (as you know if you read our last post) in Kagoshima on the island of Kyushu. Our first paper encounter came as a surprise and if we had not used “Warm-Showers” we would have missed this paper visit completely. Sayaka, our Warm-Showers host drove us to her friends washi-studio, a paper making artist. We were welcomed with green tea and our mutual appreciation for paper became our connection. The work we were showed was mainly one off pieces for large screens and wall hangings. We discussed his techniques and use of mulberry bark and bamboo in the production of his creations and he insisted he was not a traditional papermaker but a contemporary artist/maker. He explained he has been self taught and began life as an illustrator. During our tea, he brought down several paper-making books and magazines to show us traditional Japanese paper making methods. Our visit here was a brief one but a great introduction into Washi paper-making. Washi is a term in Japan for handmade paper, Wa meaning Japanese and shi meaning paper. 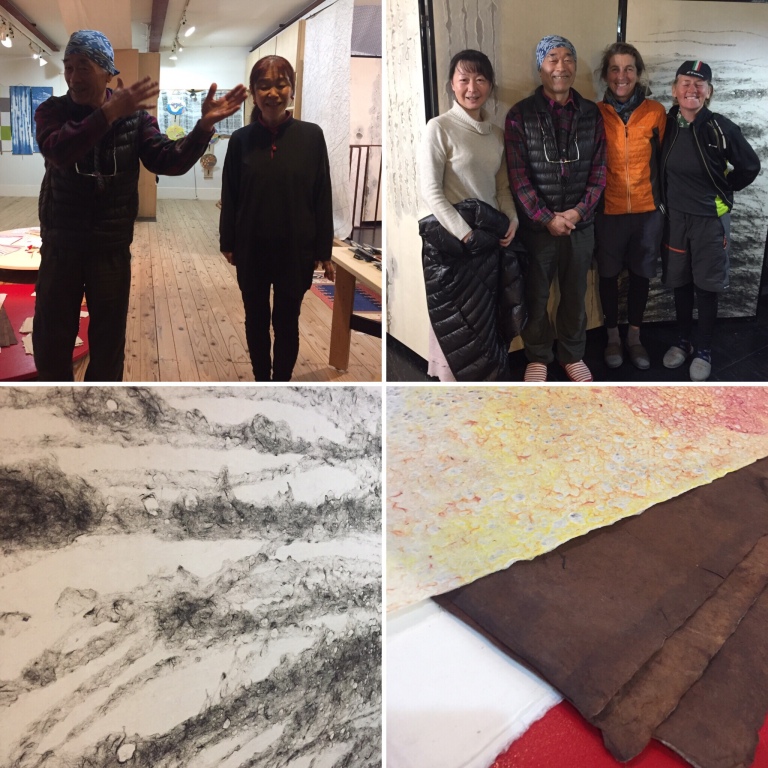 Our first mapped visit was to Yame, some 230 kilometres from Kagoshima. We had found very little information and in fact we were slightly confused and lost finding it. However, as soon as we arrived at the craft centre everything became clearer. As soon as you meet like minded people, the world opens up and further connections begin. We found the paper making workshop nestled next to a craft centre. The Yame paper-making workshop (established 1997), was both a shop selling hand made paper products and an active workshop area. On the walls were great wood block prints of the paper-making process and more vital a map of Japan showing all the papermakers, Eureka! 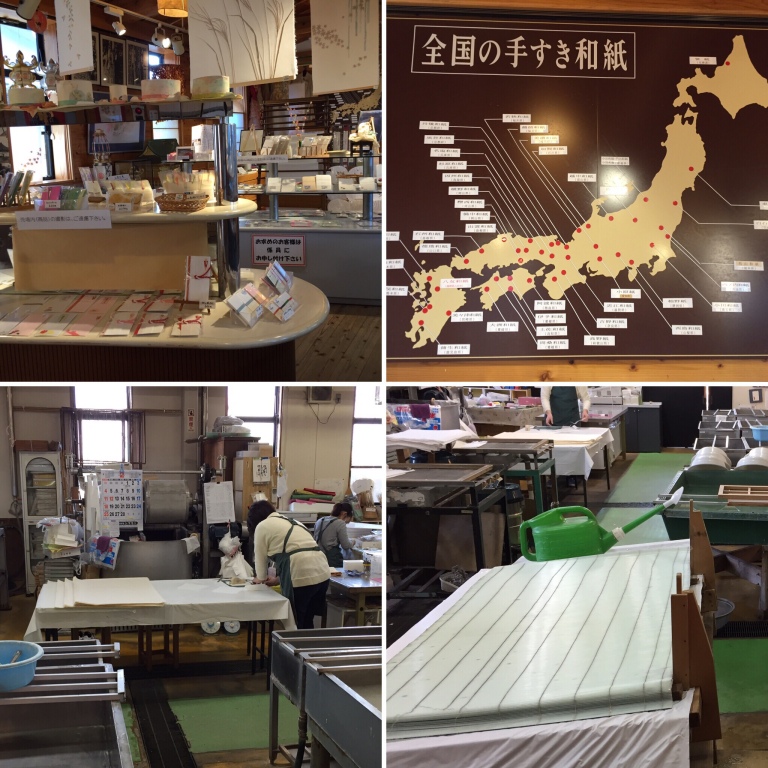 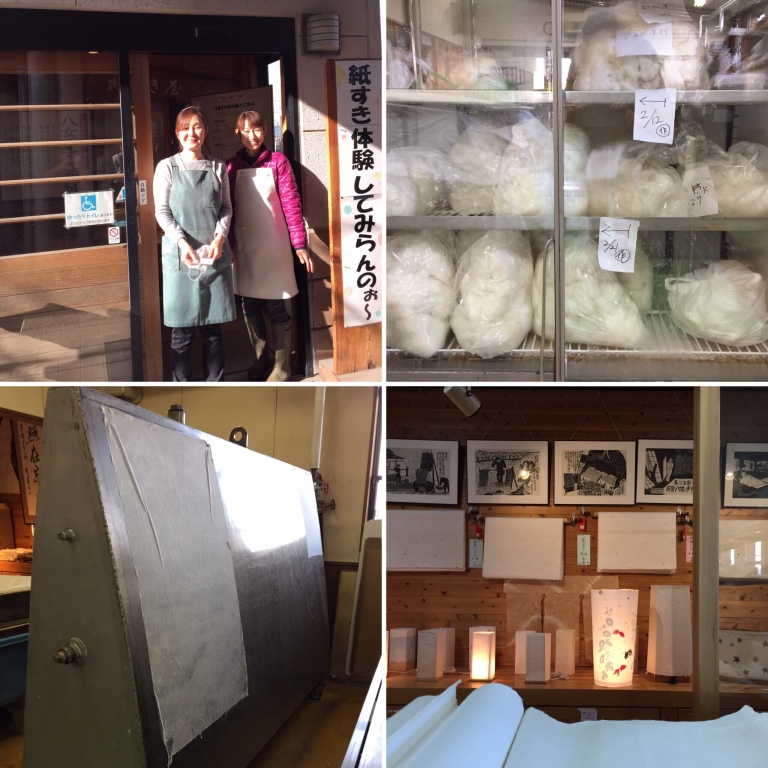 As we arrived towards the end of the day, things were winding down. We met a couple of women who were very impressed we had cycled to them and as soon as they heard of our project they were very helpful and told us about the numerous other papermakers in the next village! Our mouths wide open in surprise as we certainly hadn’t discovered this online. We decided we had to stay and see this the next day. With a photocopy map of the papermaking craftspeople given to us we headed into the info centre to ask about accommodation/camping. They walked us around the corner to the children’s park and said we could camp there for the night! The next morning the helpful staff called one of the papermakers and they told us he would be waiting for us. Suddenly things began to fit together.

A short ride to the tranquil village on the outskirts of Yame city we meet Toshikazu Mizota, who welcomed us in fluent English. His workshop was divided into 2 main areas, making paper and drying paper. There were numerous wooden frames hanging from the ceiling, even a frame for making paper umbrellas, an enormous wooden press and several other collections of paper making tools shattered around. The atmosphere from the studio was full from years of hard work and skill. The drying room had piles of previously made and dried paper, drying brushes and the staple heated drying table. We bombarded him with questions as he went about demonstrating his technique with fluidity. His frame was attached to elasticated pulleys which where attached to bamboo poles, this allowed give in the movement when dipping the frames into the water/pulp mixture. He had been making paper for the past 20 years, a craftsman who’s specialism is within conservation papermaking, which is very fine, semi transparent and extremely strong. His work is in the British library and his conservation paper is used world wide. 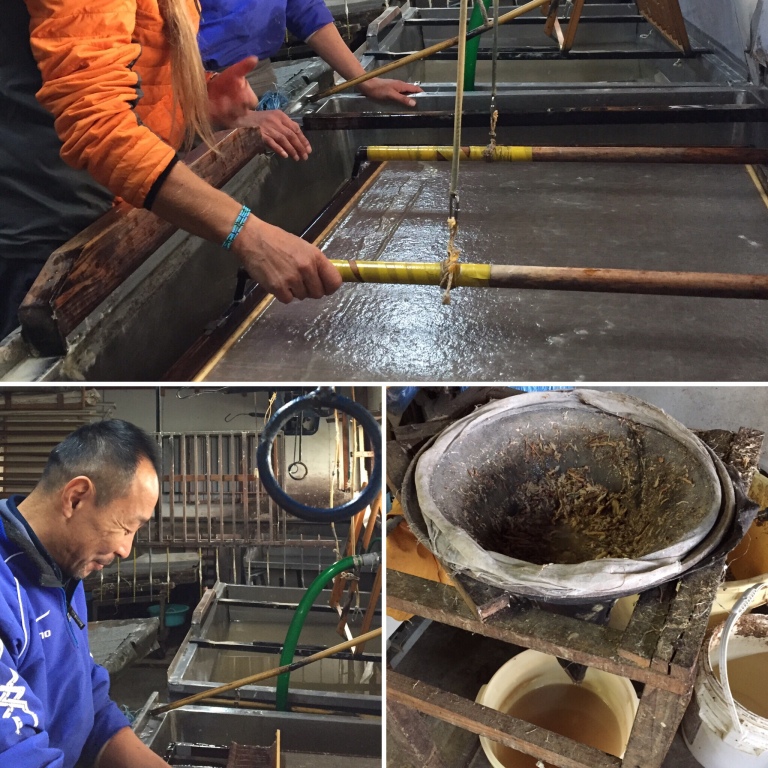 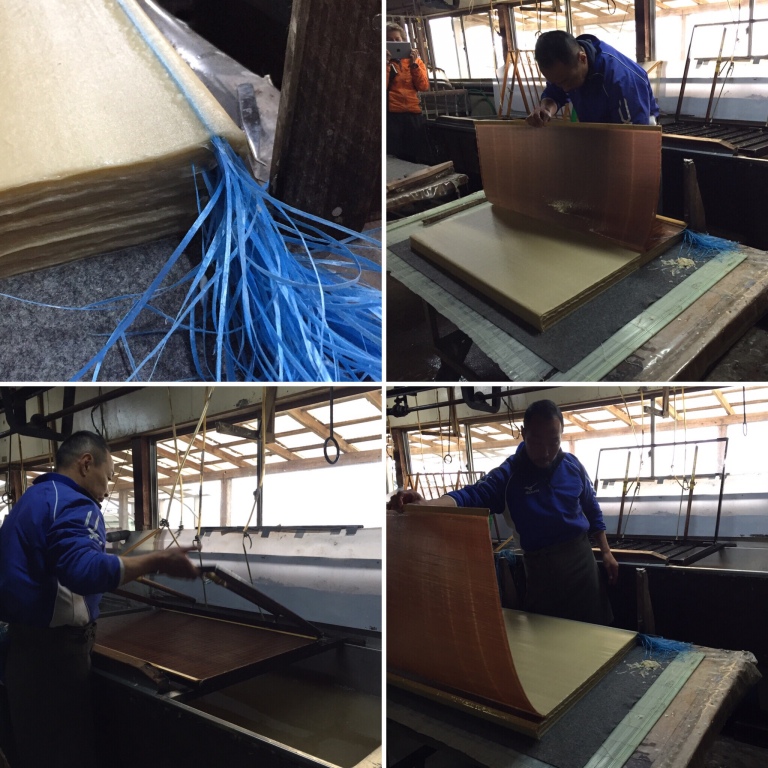 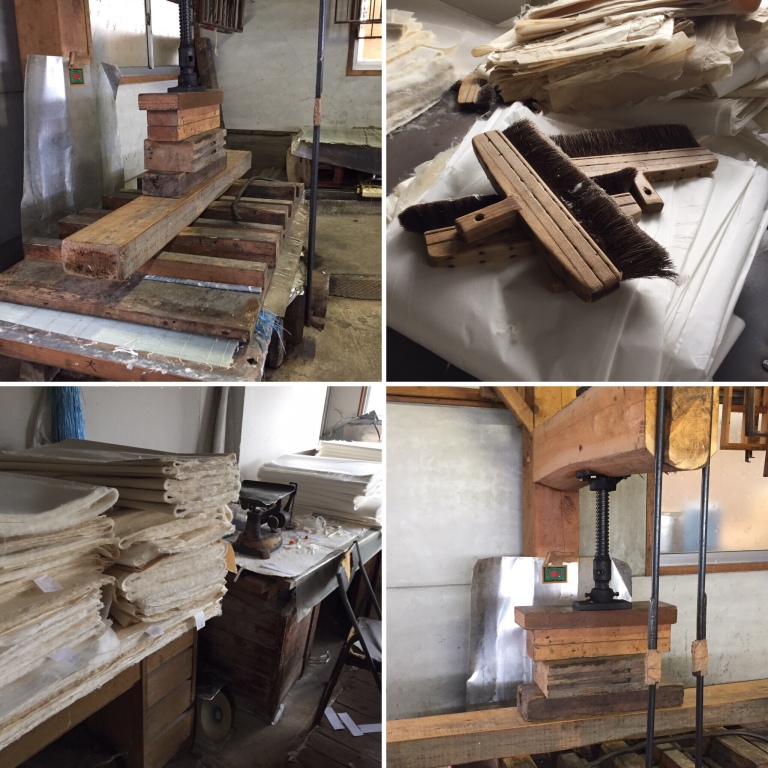 Once our questions paused he asked if we’d like to try! He allowed us to attempt to make paper but it was pretty difficult as we were stiff as boards and conscious of ourselves, but he has had 2 decades of practice. He then kindly showed us around the village and introduced us to 2 other papermakers. Both men’s specialty was in making paper for screens and wall hangings. Shigeyuki Matsuo, a master craft papermaker had a shop next to his workshop, which had an amazing range of different papers on sale. The other papermakers (Hisahiro Matuo) and wife were in another set of workshops, doing a very skilled and detailed job of separating each fine sheet and hand drying the paper on heated tables as we’d seen in Taiwan. The whole visit was fantastic, a complete surprise and well worth getting lost for. 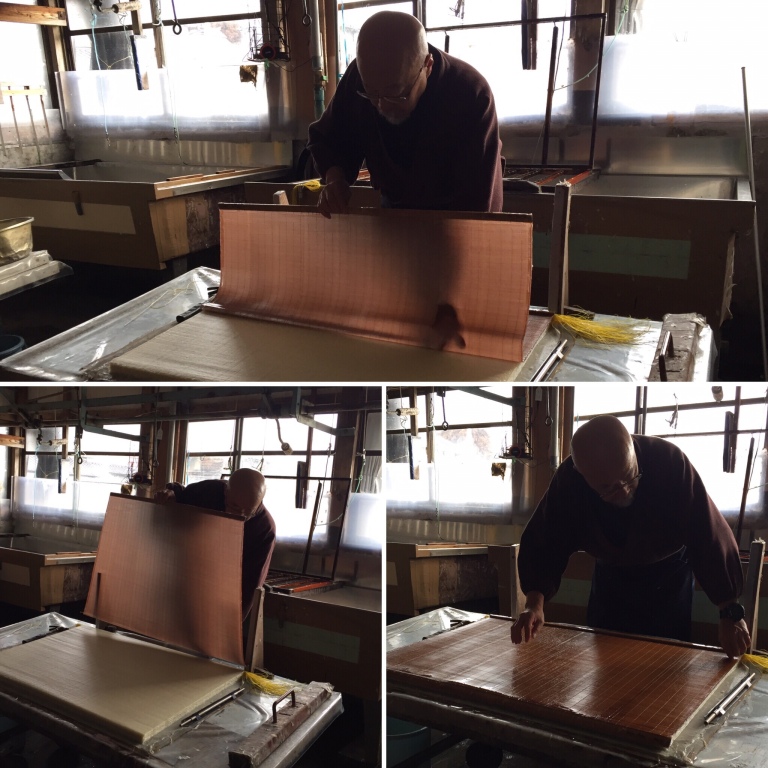 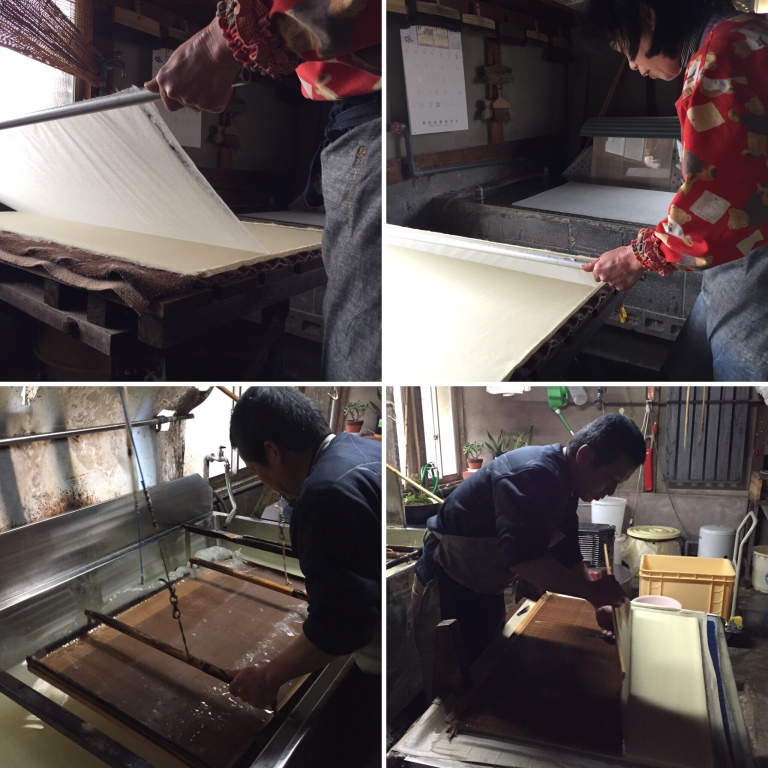 During the next few weeks we made contact with 2 potential visits on the island of Shikoku. Scheduling around cycling, the work load of paper companies is always difficult and sometimes something has to give, when things don’t fit into place. We unfortunately had to cancel our visit to Kochi and instead due to timings and distance we focused our energies on Awagami.

Awagami maybe familiar to many artists and designers out there as this is the most well known paper mill, aiming its vast range of paper products at artists. It has a clear focus and is international recognised. We arrived on a very wet day of cycling to a purpose built mill. We were met by the enthusiastic Tak who guided us around the contemporary building, which was built 30 years ago. Awagami has been operating for many decades under the Fujimori family. The area once had over 200 papermakers, unfortunately today only this one remains in the area.

The mill had all the normal fit out for a large hand made papermaker. But there were some clear differences from others we had visited. Two papermakers were making extremely large sheets, which would be used for inkjet printing. We viewed this from the second floor viewing platforms and the skill and care involved was very high. One large wooden frame and mesh screen where filled with paper pulp via buckets and then lightly showered (to allow the fixing agent to be moved). The big frame was pushed backwards and forwards by hand for the frame was seating on top of two metal tubes. The movement was, as it happens with small frames, joining the fibres together to form the sheet of paper. The formed paper was then moved to two angled table tops and the paper was carefully removed from the screen (see clip at end of post), by folding the screen backwards. 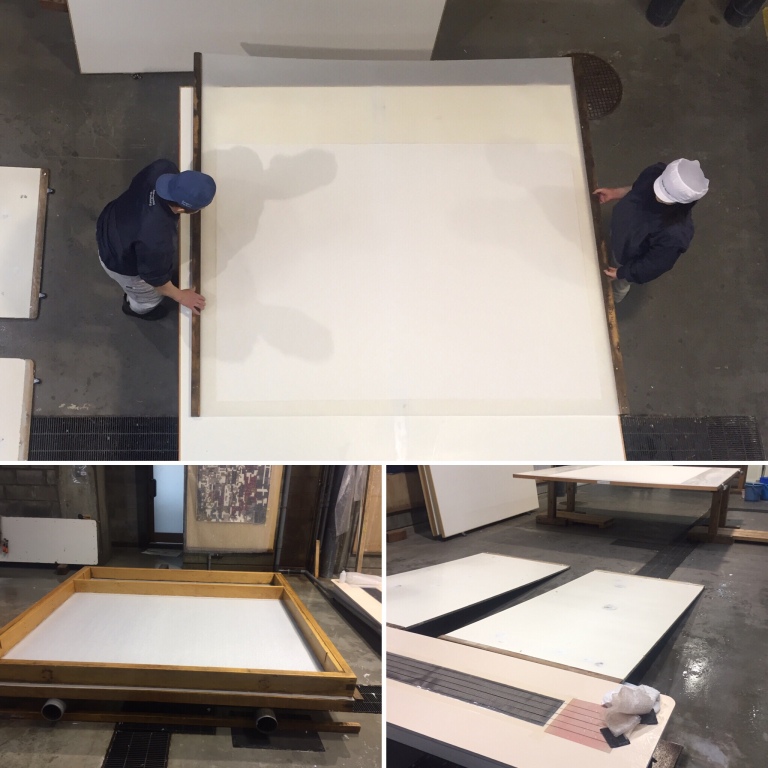 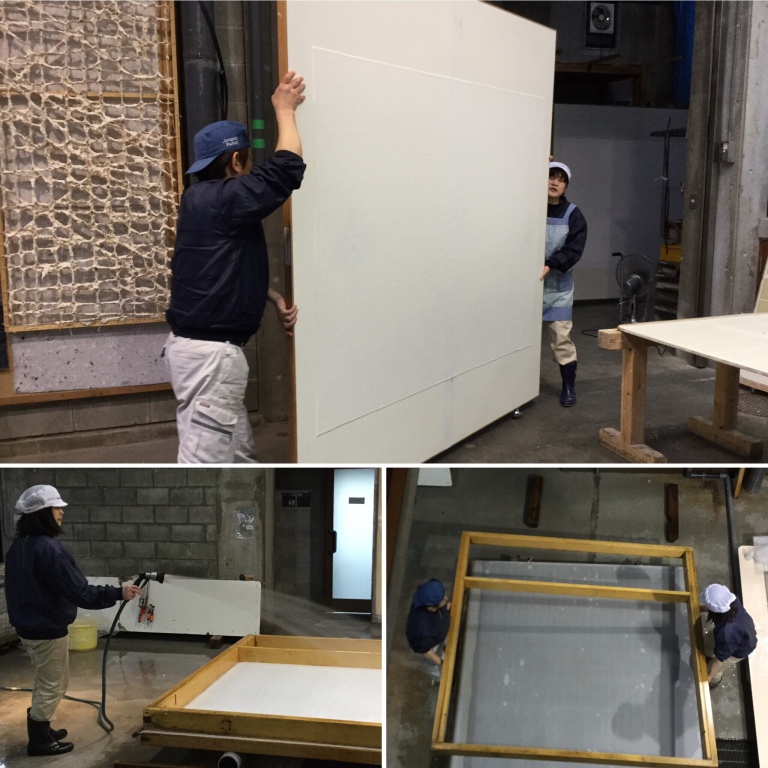 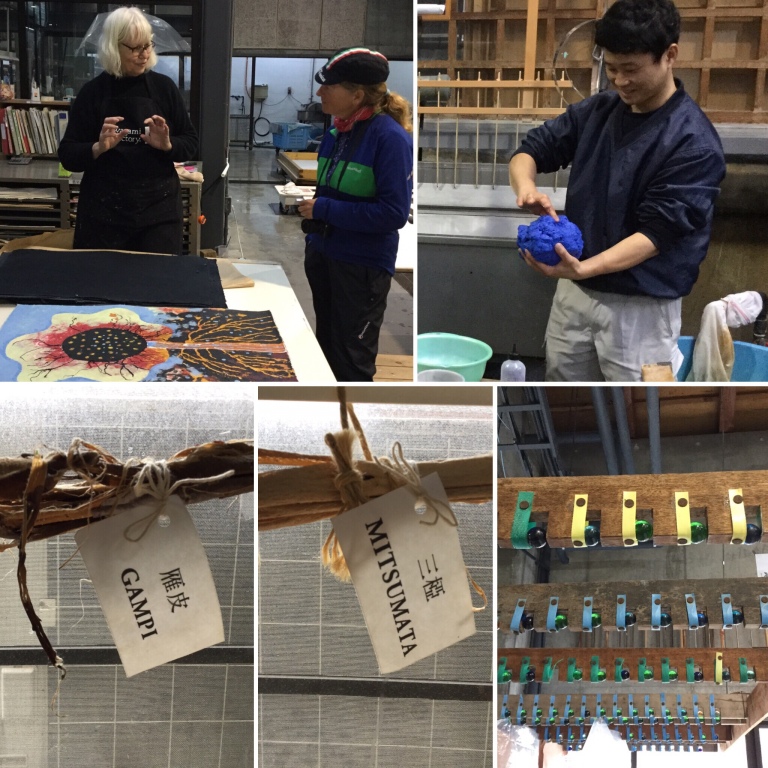 Awagami also runs an artist in residence programme and Elly Prestegård was midway through here month there. We were lucky to be able to watch her while she was creating artwork using dyed pulp. The artefacts were then pressed and dried becoming beautiful colourful unique sheets of paper. Elly’s work combined traditional material with contemporary and experimental approach and technique. 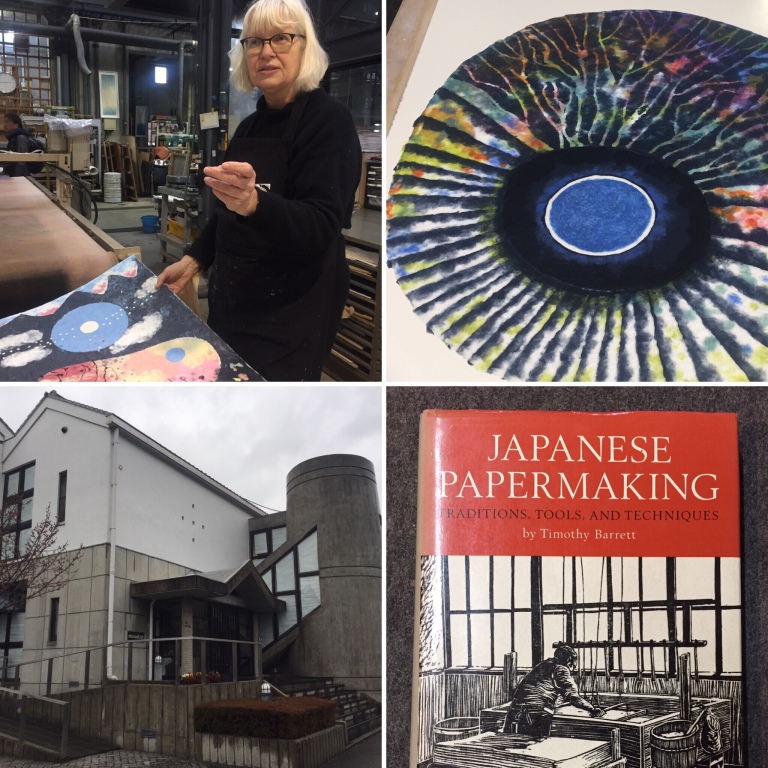 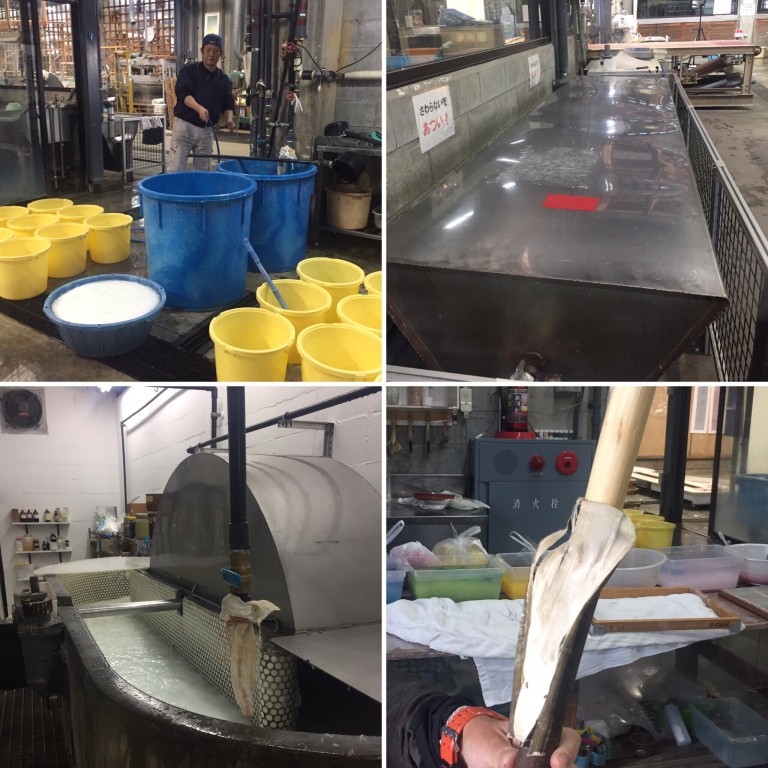 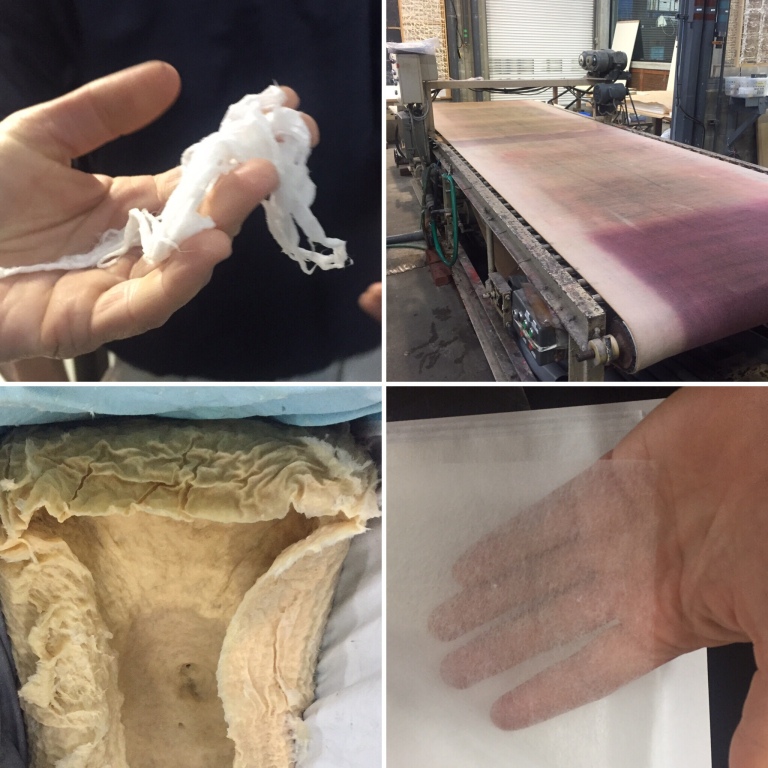 The mill also has a good library covering a range of design and art related titles. An extensive shop, exhibition space and offices are also part of the building. Awagami is a professional set up and caters to many visitors from the artist/ researcher to the school children who want to learn how Paper is made. 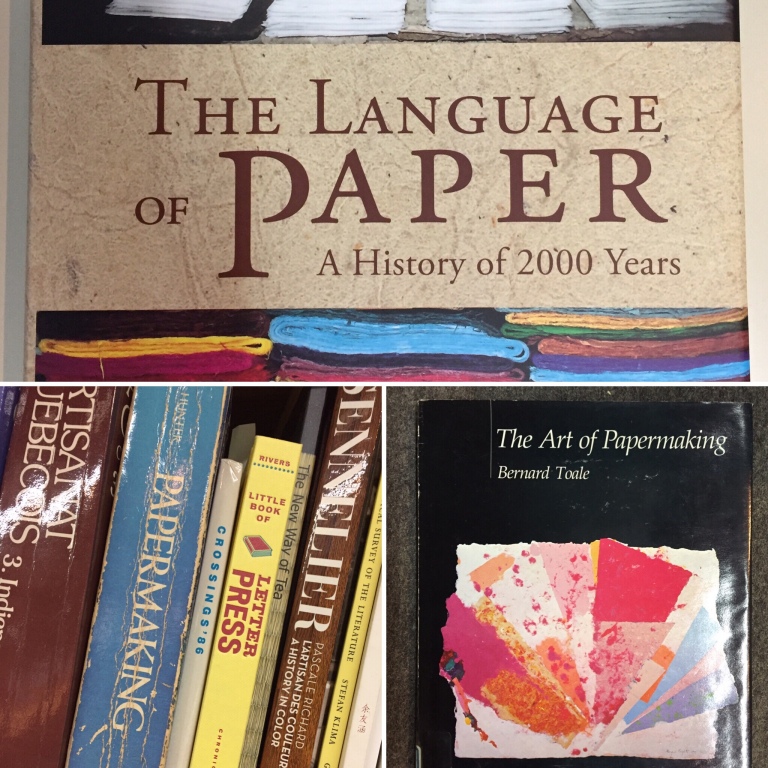 During our cycling to paper makers and obviously soaking in all things Japanese, we saw how paper is an integral aspect of Japanese life. From the paper in homes from lampshade, screens, wallcoverings, to printed and hand written pieces as calligraphy. We passed through Kumano where 80% of all calligraphy brushes are made. Stepping into a calligraphy shop is pawn to us and seeing hundreds of different brushes, inks and accessories was impressive. One owner gave B the opportunity of trying out some ink and a brush and then gave us coffee and an adresss in Tokyo to visit. 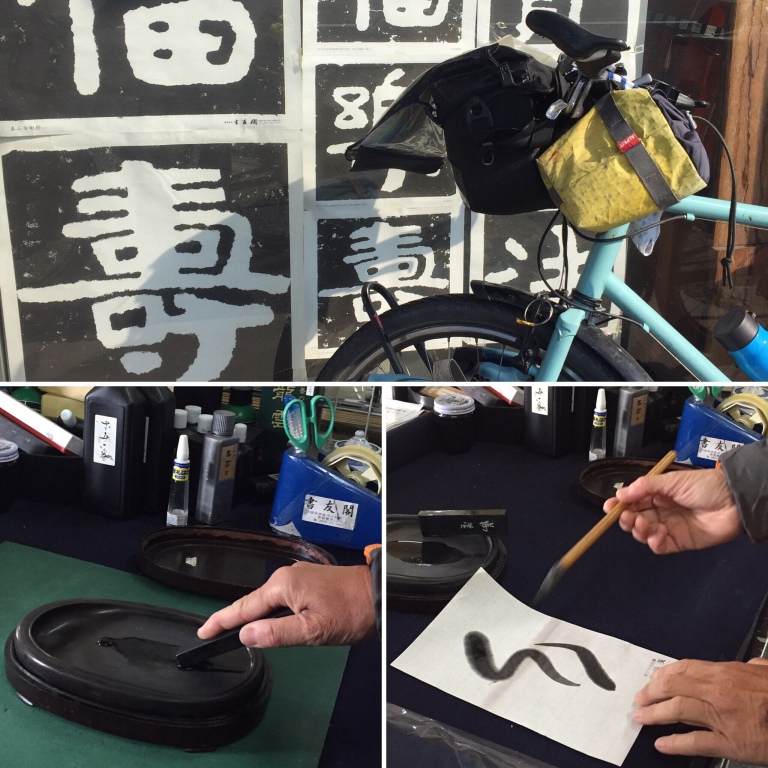 As we turn another page on our journal we will head towards a further few museums and papermakers as we enter the last 3-4 weeks in Japan.

Clip showing the separation from paper and screen-Awagami paper