I had always said to my mum ‘I would never go on a cruise if it was the last thing I’d do’ when she’d ask if I’d take her on one. Sorry mum (but she has been dead over 7 years now)! The idea came from our formidable cycle friends Chris & Dea http://www.differentpartsofeverywhere.com, who we had met in several countries during our Central Asia journey. We had kept in touch since we said a final farewell in Duchanbe, Tajikistan as we headed out to the Pamir highway in late September 2017. They had later told us their plans to take a cruise from Japan to Canada in April and we thought what a great way to cross the Pacific and head into a new land, as we both weren’t ready to make plans to return home just yet. We saw the actual ship the celebrity millennium in a port in Taiwan and thought this has to be a sign! So with lots of research, counting the pennies and discussions with our inner voices we took the plunge and booked a cabin.

For those that read this post most of you I’m sure have never or would never think would go on a cruise so bare with this post as it may change your mind.

We met up with Chris & Dea in Yokohama at James and Tamara’s house who had a kindly contacted us and offered us a bed for the night. The 6 of us enjoyed a fantastic meal, beer and great conversations about Japan and travel before our big voyage. On 26th April the 4 of us boarded the enormous vessel in Yokohama. We were able to push our bikes on board, which brought about a huge interest from the crew and fellow passengers. Not your average set of cruisers for sure. I had felt very apprehensive about the next 15 days with mixed concerns about seasickness, the cruise life and being stuck on a ship for the last stretch of 7 days without seeing land.

We were greeted with glasses of pop in the grand foyer of the ship and another very strange world was about to be ours. On opening the door to our cabin which had a balcony (as we had been upgraded from a porthole cabin by our travel representative) we soon discovered our beds, bikes and us were not going to work well in the space, so we stored our bikes on the balcony, wrapped them in the tarp and said goodbye to them. 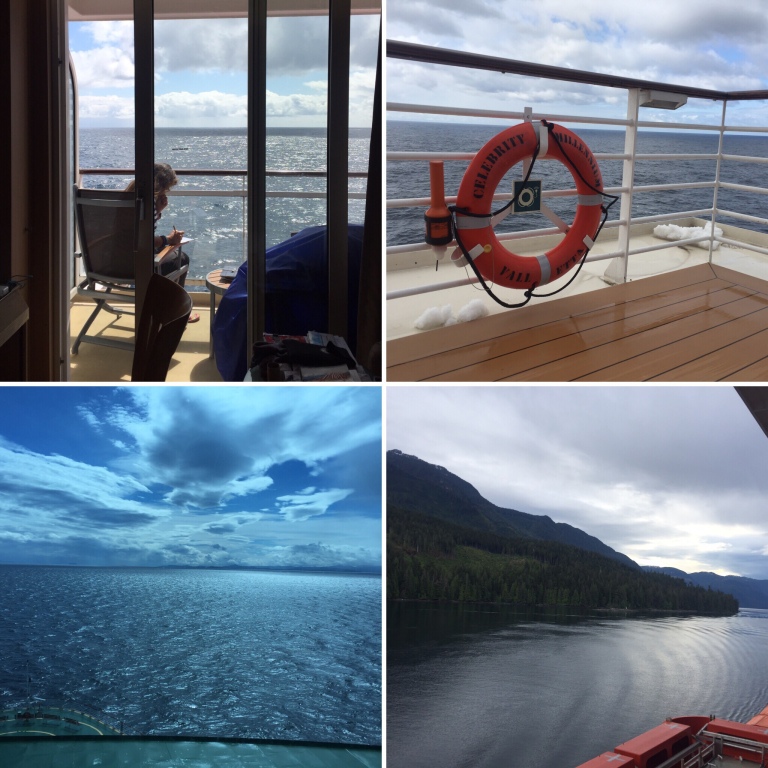 We decided to embrace life on board and to do many things we may not have gone before. I joined the passenger choir with Dea and sang (with approx 60 others) on stage in the threatre on the final day, we had rehearsals most mornings at sea. Barbara signed up to build a ship from recycled materials, which she came 3rd in the boat challenge. Her paper origami boxes with detailed illustrations of the captain and ranger John went down well. The boat passed all its seaworthy tests on the launch day to our surprise. I also managed to do many of my postcard sketches and complete all the countries we had visited, which gave me a great sense of achievement as you never get time to do this while on cycling weeks. 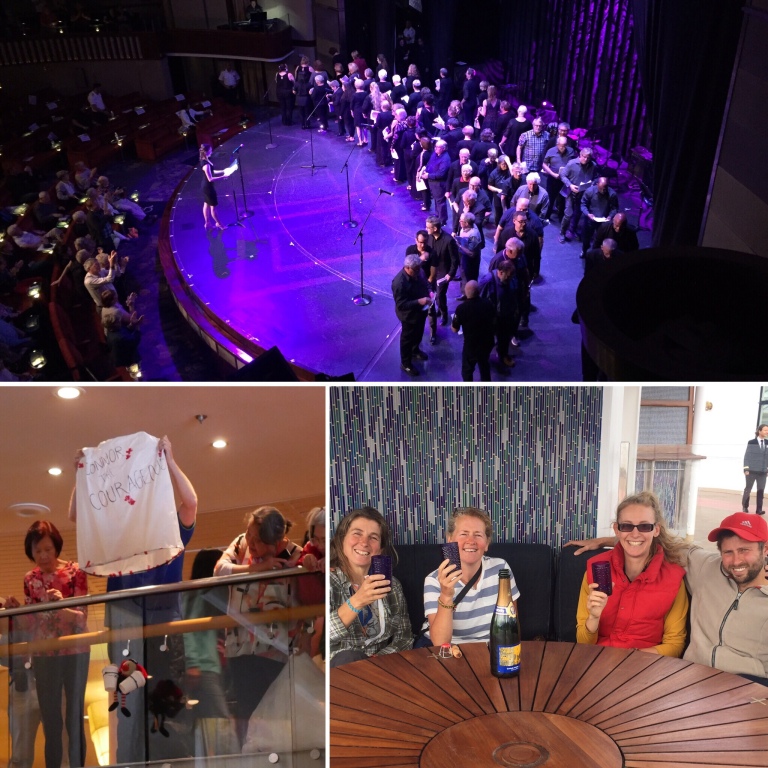 The 4 of us played a new game which we named ‘ping volley’ many days and evenings which involved the equipment of ping pong and some of the rules of volley ball kept us entertained for sometime. Chris had created a point system, which the 3 of us where never really sure how it worked but getting 5 points meant you had to really throw yourself into it and perform some strange return. We played football in the fenced court on the 11th floor. Chris versus us 2 and know matter how much we threw ourselves into it he beat us! We certainly felt the pain afterwards as due to cycling for a year our leg muscles had become cycle focused and our quads ached like hell, almost unable to walk down stairs. We never played football again on the ship and kept to other more leisurely pursuits.

We eat as you can imagine copious amounts of food with each meal. We were worried about the dress code during evening meals so kept to the main buffet style cafe to avoid any issue with our more tired and relaxed dress code! We were like kids in a sweet shop. Not seeing or eating this wide range of food for so long turned us into civilised vultures at meal times. We certainly made the most of the culinary extravaganza.

Apart from eating being one of our main activities we also went to lectures, films, the gym, quizzes, silent disco and evening theatre performances. The range of entertainment on sea days was well organised and at times we often commented we were too busy! We also spent time on the balcony or on viewing decks staring at the ocean in search of wildlife or in hope of land. It certainly gave you an impression of the scale and magnitude of the Pacific.

During the first week we had 3 visits to ports in Japan (Aomori, Hakodate, Muron) where the ship was welcomed in and often given a musical farewell by a school band. We also had a stop in Russia (Petropavlovsk) where the landscape had changed into a wintery scene of isolation and beauty. We remained on ship as we had not had permission to leave the ship so instead we sat and admired the bay and mountains around as the other passengers waited and queued to see the port town.

After our short visit to Russia we were then at sea for the remainder of the next week transiting the Pacific. Each day we lost an hour as time went forward an hour. The days got shorter losing an hour almost everyday and then the strangest experience ever. As we crossed the international date line and saw the end of May 4th we awoke to repeat May 4th. We travelled forward across the ocean but in fact we travelled back and forward in time. There is perhaps no other way to experience this time repeat other than sailings or rowing across the ocean. The crew made great use of the day and celebrated as if it was a New Year’s Eve party. There is no jet lag while on the sea but there is a build up of travelling so far and across so many time changes that by the end we were glad to stay in one present time for a while.

The 2000+ other passengers came from 35 countries and covered many walks of life. We met some interesting and warm people who we chatted to and shared this strange floating world with but there was a large proportion of people who make cruising a way of life and are mainly retired and overweight, some with mobility issues and some with manner problems. There was an apparent difference in staff and passenger nationalities with majority of the crew from the Philippines and the passengers mainly white and from the west. Things really don’t seem to change there.

Everyday at 10am over the communication tannoy the captain would give his daily announcements on the weather, route and upcoming events. A large storm was 200 nautical miles behind us with waves over 8-10 metres high, which thankfully never caught up with us, we had a lucky escape there and it would have been a very different journey if that storm caught us. I don’t think my sea bands would have got me out of that motion sickness.

As we approached the Canadian waters we voyaged through the inner passage between Vancouver island and the mainland. The proximity of land was almost in touching distance as the large floating hotel navigating through this stunning channel. Dolphins, porpoises gliding, jumping through the ships swell, bald eagles drifting in the warm air streams and the odd shape of a possible whale kept us mesmerised until night fell. We woke early on 10th May to see the approach into Vancouver, passing shipping containers, and finally docking.

Our transpacific journey was at an end. We had truly rested, fed our bodies and minds and immersed ourselves into cruise life. We pushed our bikes and bags off the gangway, cycled through Stanley park with Chris and Dea and hugged goodbye as our routes split, saying I’m sure we will cross paths again soon.

The experience of the cruise has been so much more positive and enjoyable than what we could have ever expected. Going on a cruise as an anomalies (cyclists) you can enjoy all the offerings and know that your real life is about to commence again. Here we come Canada…

6 thoughts on “Time travel (on the sea)”