After a brief stay in Vancouver, both feeling overwhelmed by the return to ‘western’ living we escaped through the beautiful Stanley Park and over to west Vancouver to spend a noisey night ( campsite next to main road) in a RV park as I was mid way through a heavy cold. Vancouver is amidst stunning settings with mountains, sea and beaches fringing it. However, with most cities the natural beauty can be interrupted by modern issues of homelessness, drugs and general disrespect for each other, something that was not clear to see in Asia. We were in serious culture shock. Both questioning why ‘our’ world is like this and how and why did some of the Asian counties we had cycled through seemed to have more tolerance, respect and humility. Through some reading I had done I had read that Japanese citizens operate in a group mentality and see themselves as part of a whole. Not wanting to let down their group this is one thought on why there is less crime and more community action. Perhaps our western culture has been driven by the ‘me/I’ and less about the ‘us’. This countries are not perfect by any means and perhaps many of their issues are suppressed and hidden, no matter what we needed to adapt. 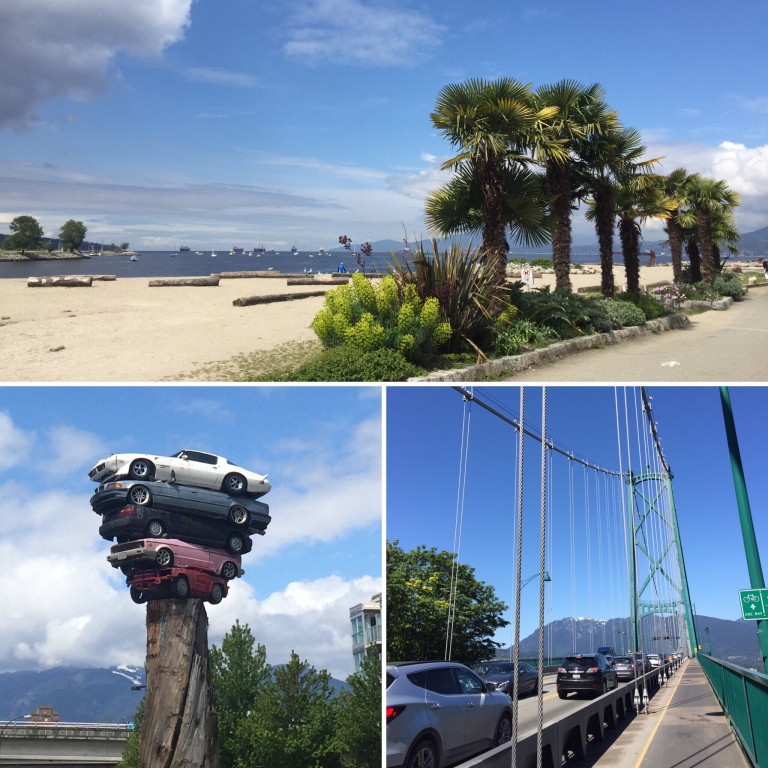 The Sunshine Coast was a perfect introduction away from the city. We had planned to spend a leisurely 9 days cycling along the coast and over to Vancouver Island before arriving in Victoria. We left the RV park still with a cold but feeling happy to be back on the heavy bikes after the 2 weeks on the cruise. We knew it would also take our legs a few days to get back into the rhythm of cycling but once back on our trusty steads we where home again! We rode along both the marine road and highway 101 which quiet with little traffic. The scenery was breathtaking with many islands, lakes, coves and bays to admire. Forested landscapes and the odd ‘Beware Bear seen in area sign’ were are only markers. We were know in wild animal country. Cougar, wolf and bear signs awoke us from our idyllic setting and reminded us we were now in a new land that nature was the dominate force.

There are 2 ferries which link the Sunshine Coast (1 ticket for both crossings approx £20 for 2 and bikes) which glide you through the fiord like passages. The sun shone and the sea glistened as we sailed to the next part of the mainland. There are no other roads that link the land so the ferry is the only transportation (other than seaplane). We camped in a variety of sites some for free and some with payment. We tried to find some wild camping spots but due to many ‘No trespassing’ and ‘No Camping’ signs we often found a site. New to a country, unaware of any gun laws and the many ‘be aware of’… signs we often camped in a designated place. British Columbia has hundreds of provincial campsites set in woodlands, beaches and meadows. Some with just a pit loo and running water and some with shower blocks and fire pits. These were perfect and responsibly priced. Our first experience of a provincial park in Roberts Creek we found the site closed as the season had not opened but we manoeuvred a way through the closed entrance and found a site, which several other hikers and bikers had also. The next morning 2 deer passed our tent and thankfully no other sittings of wildlife happened.

We were now back in a country for the first time since we left home in April 2017 that English was spoken, the supermarkets were abundant with recognisable foods, even being able to read the labels and signs took awhile to acknowledge. So some things being back in the western world were positive. We stocked up for several days of foods in a big town as some cycle days you just past a small overpriced grocery.

Our last stop before leaving the Sunshine Coast after 3 days was in Powell River. We had read that Townsite, next to PR was a town created to house the workers and community for the Powell River pulp and paper mill, established 1909. Which was once the world’s largest producer of newsprint and had a unique water structure called the ‘Hulks’. The mill was sited here due to the proximity of the Tees Kwat river for it’s power the river created to create hydro electricity. The abundant raw materials from the logs was easily sourced from the nearby forests. 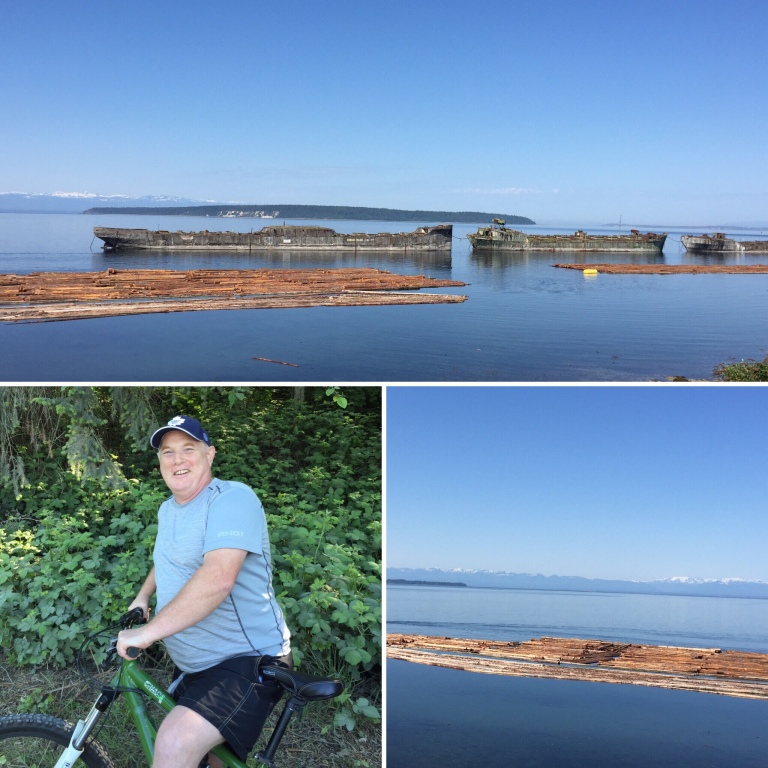 We camped for the night in the municipal campsite close to the beach. The next morning we visited the archive museum and the Hulks. These floating beasts are decommissioned World War II ships that have been utilised as a floating barrier for the logs. A semi circle of rusty metal vessels protect the large floating logs before they are processed into saw dust. As we approached the Hulks we stoped and asked a man on a bicycle if we could access the area. He happened to be Bryan, a man who had worked at the mill since the late 1980’s. We told him a little about our cycling project and he confessed that today was his first time on his bike in years! Bryan told us how the change in consumerism had reduced the output of the mill and how the paper products accordingly changed. The days of the world’s largest newsprint producers had long gone. The workforce of over 2,500 employees had been reduced to 400. Vast paper making machinery had been sold to China. With the technology changes such as digital news access to the redundant telephone directories (yellow pages) the paper mill evolved into producing food wrappers and other throwaway paper products. Bryan pedalled off commenting that cycling to work a few kilometres was hard and he had no idea how we could have cycled from England to here!

The mill now owned by Catalyst was not on our research list and we felt that a food wrapping plant didn’t fit our criteria, however the historical aspect and the presence of the Hulks would feature in our documentation. The small archive museum back in PR documented photographic records of the logging industry and the workers from the mill. Unfortunately we were not allowed to reproduce these images via our own photography. This being our first paper visit to North America has allowed us to be connected to the local materials; the wood fibre and landscape of forests. 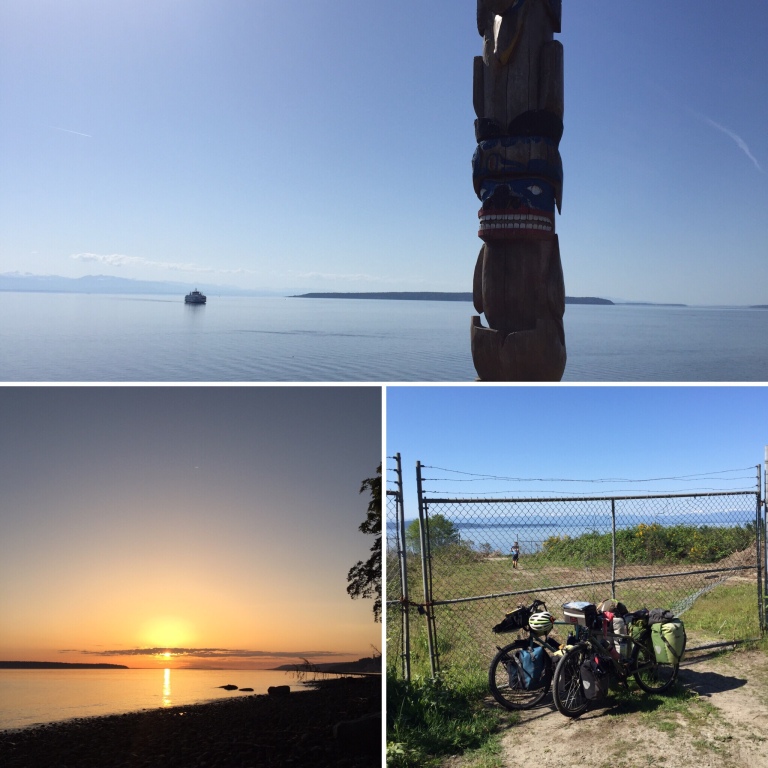 Another ferry ride across the straits of Georgia traversed us to the snow capped mountains of Vancouver island. The route 101 brought more traffic and at times we could avoid the road with smaller trails and roads. Again we were greeted with further no trespassing and camping signs and we found some glorious provincial campsites. The Rathtrevour site was a wild haven. We sat and admired a horned owl for ages and at dusk a small group of deer grazed in the meadows. We met a fellow cyclist from America and exchanged cycling routes. He kindly learnt us the book; Cycling the Pacific Highway, so we could considered this as our route south. In all our time cycling we have never followed a cycling guide and it felt odd to see instructions and recommendations.

One evening we were struggling to find a place to camp with all the prohibitive signs. We came across a rather run down RV site and Barbara enquired about any places to pitch for the night. The young guy phoned his boss and returned to say we could stay the night for free, as they were in the midst of renovations. Then on our final night camping we knew that the ‘Victoria day’ long weekend was upon us and we anticipated busy sites. When we reached Bamberton provincial park the full sign gave us a ‘oh no’ moment. We cycled around in hope it wasn’t full and the warden told us someone cancelled for the night. As we approached the spot there was an orange plastic sheet draped over a rope, creating a shelter. Sorry said the warden, I forgot this gentleman has taken the spot. The gentleman happened to be a fellow cyclists from USA touring the island for several days. He kindly offered us to share the spot with him. Our tent felt a little posh compared to his makeshift rig. We happily chatted with him, exchanging cycling tales. We admired his method of travel luggage; a semi transparent plastic box with the bare minimum. 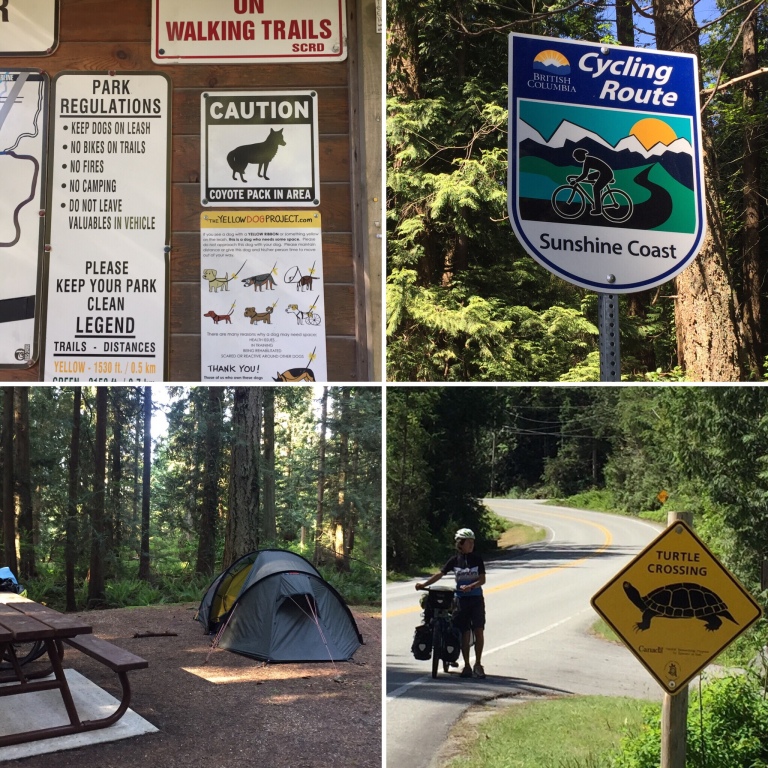 The final day we took the Mill Bay to Brentwood ferry, which avoided the busy and roadwork highway. We arrived in Brentwood and headed to the cafe where we met several groups of people all interested in our trip. Our jaws tired from chatting we headed to the Lockside cycle trail and enjoyed a traffic free cycle route into Victoria. We were joined by 2 lovely men on bikes (Lee & Nick) who took us under their wings and guided us all the way into Victoria with a few stop of interest. It was like we had known them for ages as the 4 of us chatted and laughed away. The friendliness of the British Columbian people was heartwarming.

Our guides had taken us to the front garden of Silvia and Duane’s house where we were ending our cycling again for several weeks.