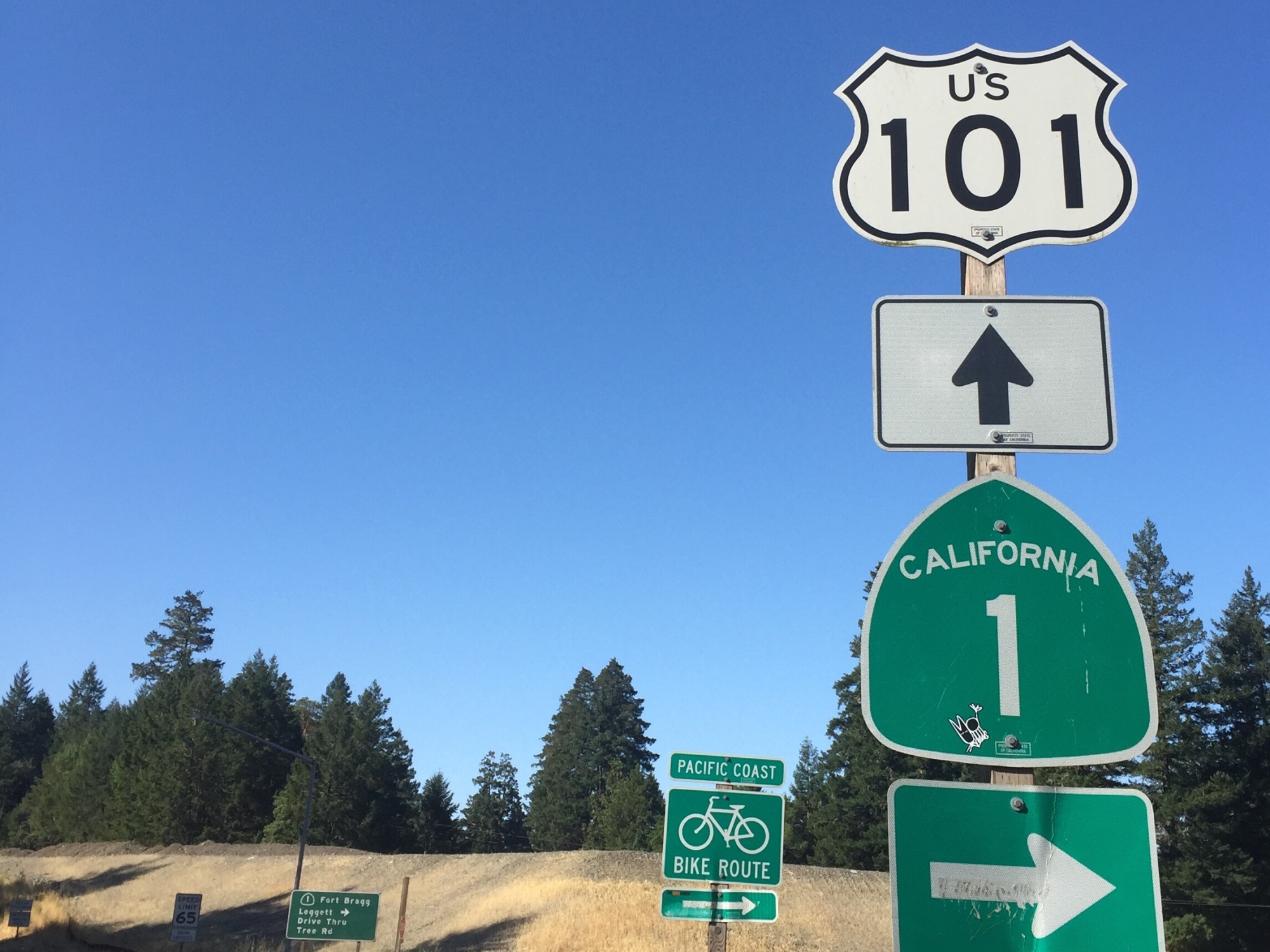 The repetitive warning horn continued to blast through the raising fog that curved over the contours of the hills. The fog became a recurrent theme almost every morning when we were on the coast but within maybe 10km inland the temperature and climate was a different story. Crossing into California seemed a significant moment, it was to be our last state on our tour. We wanted to saviour every last moment so when we arrived at Jedediah Smith Redwoods State Park we fell into a trance with the Redwoods. Our campsite was among these gigantic elders. The site still had the original stone fire from the 1950’s, which we used to keep the mosquitos away at night and there was a seductive river near by where we all plunged into the cool water and washed the days ride off our skins. What could be more idyllic than a swim in a clean river, a campfire at night and to fall asleep under these hundred of year old trees. The thought of not having these rudimentary joys does give me a feeling of loss already, so a reminder to self; enjoy every minute.

The Avenue of the Giants was something we had looked forward to and with a 32mile long drive along these towering structures we gazed through and up into the canopy of foliage. Thankfully these Redwoods had been protected but still only 5% remains from the original forests. We were greeted at the entrance by a young American couple eager to know about our trip as she wanted to do a long cycle journey with her partner. As we started to leave they asked if they could pray for us. They broke into a very thoughtful prayer and asked for our continued safety along the way. Normally I would feel quite uncomfortable about this ‘god’ encounter but there was something very natural and heartfelt about their desire to ‘spiritually’ support our journey. 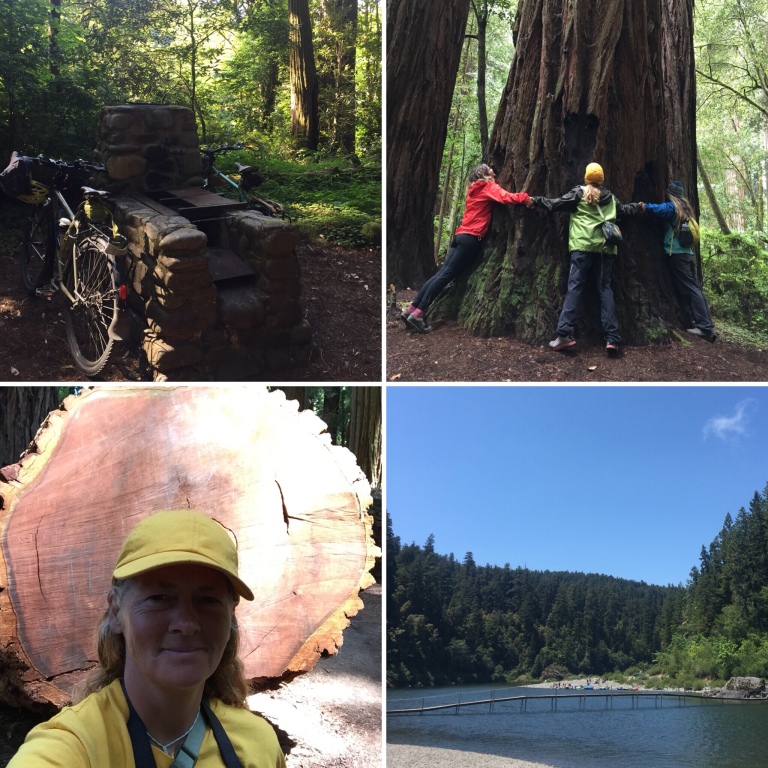 Another great stop, which was a side trip to Ferndale, which surprised us with the historical preserved town turned into an improvised overnight stop so we could again enjoy the architecture and calm atmosphere. We camped in the unusual county fairground where RV’s where parked up getting ready to show their dogs off the next day, as it was a dog agility event! We were given a free bottle of red wine (which may have turned, he seemed the acid stomach the next day) from reception, which did make for a pleasant night.

We continued along the 101 which then turned off onto the coast road 1. We had read it would be an epic climb, so we readied ourselves and got up early to avoid the heat we had experienced the day before, which did nearly wipe us out. As I’d mentioned once inland the temperature was way into the mid 30’, which is a little uncomfortable for riding all day but once on the coast it can feel like 20 degrees less! The climb was rather long but their is something I enjoy about an ascent, even if carrying a heavy load of 25 kilos plus the bike. The day of ups and downs took a toll on the legs which had almost given up. So the following day we cut short the day in two to recover and enjoy another sweet town of Mendocino, where wooden water towers a-joined the wood houses.

We had been cycling in a permanent cloud of worry, as Barbara had news her Uncle had become very ill. Unfortunately within a very short time he had died. Getting this terrible news so far away from home had been torture for Barbara and there was little I could do to ease her grieve. She could not get home in time for the funeral as in Italy this happens within 1-2 days of a death. The next several days of cycling where a blur, as we were just pedalling in a state of loss. I let each day pass hoping with each shift in a day Barbara would be able to begin to see things again. She had several profound meetings with strangers which I believe helped a great deal. She met a couple along the road who chatted for ages, who happened to be a vineyard owner and took her into their home and gave her one of their wines to bring back to our campsite. At this camp ground we met a lovely Mexican/San Diego couple. The next morning Barbara and the women chatted in depth about loss and seeing things through the eyes of their loved ones they had lost. I truly believe these open encounters helped towards an acceptance of loss for Barbara. The uncertainty of returning home early lingered and with this we just took time to review our next move. I have clear memories of Barbara and her uncle hugging each other for a photograph as we left Italy in May 2017, this was the last time Barbara saw him.

With the constant presence of nature along the route you can truly enjoy the here and now. Feeling the Northern Californian cooler weather, the mist running through your path, the entire day and night in the outdoors, you are in the elements. The every changing landscapes allowed us to drift off in thoughts and it would be punctuated with a sudden climb that would be felt in the lungs, heart and legs with the head telling you to rest or give in. The coast route 1 was dramatic and at times the road lay on the edge of a cliff. There was little or no hard shoulder for cycling on so we were grateful for mindful drivers. The landscape and weather reminded of Scotland and also reminded me I must see more on our doorstep of Europe.

Many Pelicans enjoyed the warm currents as they flew along the coastal cliff and seas. Barbara saw several whale spouts and one diving all in the same picture frame. I had not expected that Northern California to be so remote and that nature would be the leader here. There is a shift in State attitude and Californian’s personalities. The summer fires are raging in many areas and we have met several people who have lost their homes and dogs. There is about 7 fires currently ablaze and locals are not in denial that climate change is the main reason for such natural disasters. Their current president is not in favour here and many people apologies for his presence in the world as their leader. When we do pass a small town the homelessness is still a stark reminder of the imbalance of the states social structures here. This is something we will not become oblivious too and the fact that people have no care system here reminds me how luck we are.

During our ride through this section Marie has continued to be our camping and planning companion. We have continued to enjoy her company and shared some good laughs and conversations. We enjoyed a wine tour in the Sonoma region together, where we sampled numerous wines from Roberts Creek vineyard and shared a bottle she treated us to one evening. The numerous riders we have met along the way continue to pass us and most (men) ask ‘how many miles have you done today’. We reply; ‘we are the counter culture tourers, we try to cycle as slow as possible and do as little miles as possible’.

As we approached the outskirts of the San Francisco Bay Area, State Parks only allowed 1 night maximum stay, so the 3 of us toured the area before we could approach SF (pre accommodation booked). The thought of crossing the Golden Gate Bridge became a significant moment, a milestone on this section of our trip. The 3 of us approached it from afar, hundreds of hired bike cyclists weaved, wobbled along heading towards us, as they had crossed the bridge. The headwinds, fog and traffic noise all contributed to a rather stressful time. We hugged Marie and saw her head off over the bridge, weaving in between the tourists as she disappeared into the San Francisco fog. We turned back and headed to our hostel in Marin headland, in the middle of nowhere. Later to find out that public transport only runs on weekends. Our proposed rest days turned into commuting days on visits into Oakland and downtown visiting papermakers. We crossed the bridge 9 times in all weathers and one day experienced a rather tragic reminder of other people desperate state. A women had climbed over the railing and positioned herself of the ledge, attempting to jump. There were many support workers their trying to talk her back. 2 life boats navigated the waters in the event she jumped. Many cyclists and pedestrians were stuck on the bridge for a long time until the other pavement on the opposite side was open. We cycled back to the other end, crossed over and rode across the bridge again in hope the women had been rescued. 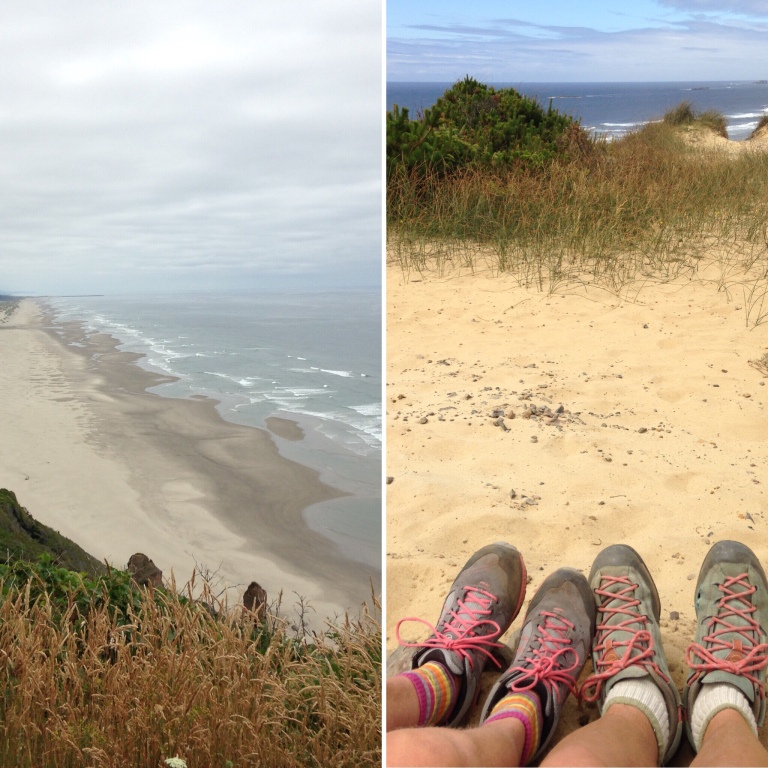 Flights home had been booked and our return date to the U.K./Europe set for 6th September. Reality of our return is near but we have vowed to relish our last 4 weeks as we continue south to Los Angeles. We hope the fog evaporates and clearer days approach.