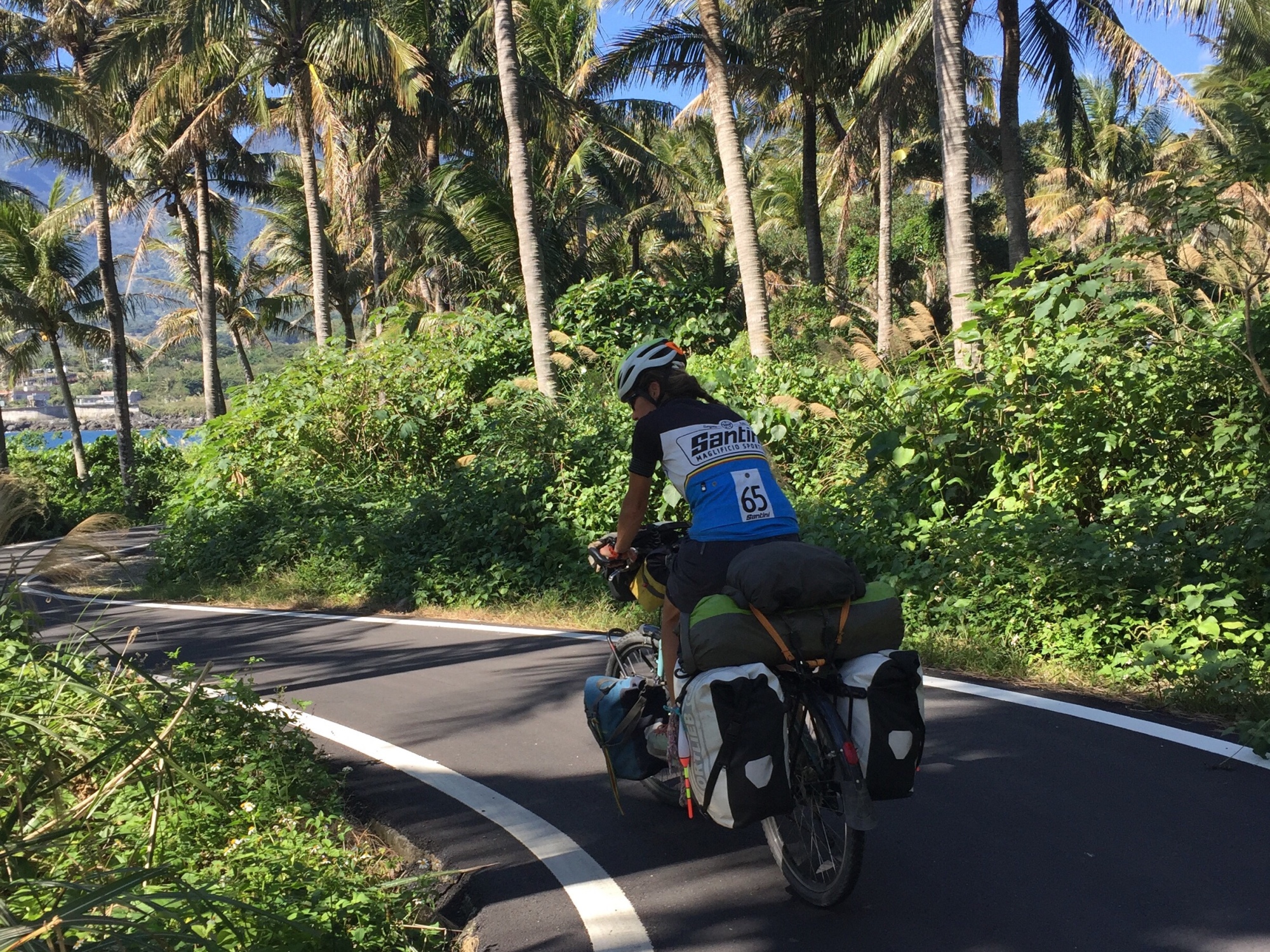 We asked if we could use the hotels wifi in the hamlet of Baisha and within 30 minutes of us reconnecting with the world, the young women on reception walked towards us with a big plate covered with a napkin. “I was making my dinner and thought you must be hungry too”. A triple egg, tomato and ham sandwich each and orange juice. We hid the ham in a bag (which the campsite dog got later) and felt overwhelmed with the surprise of generosity yet again in Taiwan.

We have spent just almost 4 weeks here and each day feels like a holiday. We really needed this break away from visa time limits, set kilometres to cover and not to mention travel obstacles. Taiwan is laid back (well, the parts we have experienced), cycle friendly and at this time of year is quiet. There are many positives to travelling out of season. We are almost the only ones in a campsite, so we can spread out. One of our favourite camping spots has been in Baisha, Kenting National Park (southern Taiwan) next to the beach where some beach scenes from the ‘life of pi’ were filmed. The tour buses bring an army of people to dip their toes in the water but as soon as they go it’s ours. Today we donned our bathers and plunged into the turquoise water, not bad for late January. We have also had time to draw, read and research which is rare on previous cycling countries. 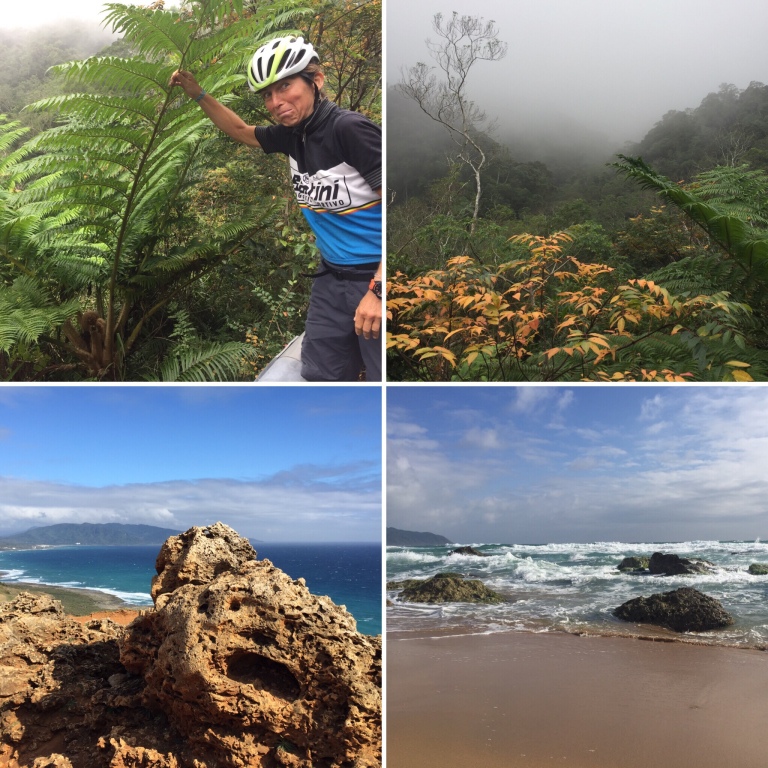 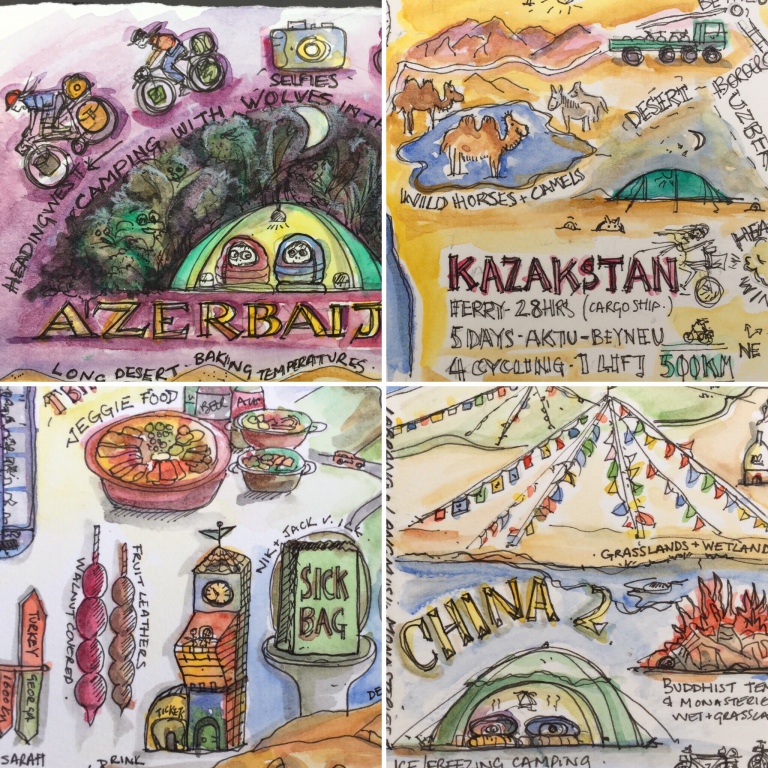 Our route has taken us from the north Coast along to the east coast. We have had buckets of water thrown at us, well from the skies as rain has continued fighting with the sun. We were forced to abandon cycling and take refuge at the Rising Sun surf Hostel for several days as conditions were too dangerous. Candy, the owner had organised a beach clean up day, which we volunteered to take part in. It was both educationally lead and the clean up brought about 40 people from Taiwan. We broke into teams to collect as much rubbish we could find. This was in the torrential rain which didn’t seem to bother the Taiwanese. At the end of the afternoon we separated the findings into categories, things weighed and photographed and disposed of. Food and ginger tea was laid on and we got to meet lots of great people. Our stay continued as the rain continued but Candy and Dredd offered to cook lunch for us all. We have been welcomed with warmth and friendship instantly here and I hope it teaches me more humility in the future. That the simple things of food and conversation still run deep throughout our differing worlds. 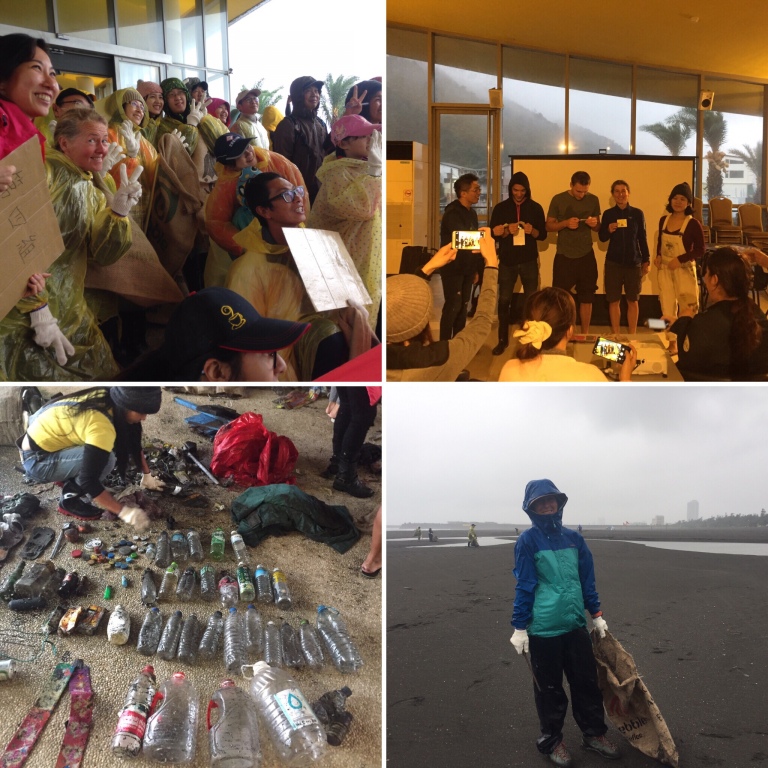 With a break in the forecast we hit the route no. 1 and thankfully the rain was light. We stayed in a hostel and stumbled into a supermarket which gave us some home treats for the coming days. We had been warned by everyone we met not to cycle the next 100km which took you through the world’s highest cliffs. Earthquakes and landslides (after days of rain) could block the road and there was no room to cycle next to trucks. We followed their advice and took no unnecessary risks. Taiwan is set up for cycling and railway stations have ramps, lifts and there are several trains you can take your bikes on. You pay half price ticket for your bike, which at £1.50 is nothing to complain at. Within 90 minutes we were on the other side of the notorious cliffs and set out to climb into Taroko national park. It had been raining for days and the gorge was full,of water, the road had been cleared of recent rock falls but we climbed with caution. Especially as the hut we passed was loaning out free helmets for walkers. As several tourists had been killed in a hot spring when rocks fell onto them several years ago. We were already wearing our cycle helmets as we cycled up the twisting road and waterfalls cascading from high mountains. White marble river beds and turbulent waters had left their marks here. We camped the night in an official free campsite again, we were the only ones.

Hot springs are dotted across the island and we experienced a few of these which came at intervals when are bones and muscles were glad of the hot medical waters. One hot spring allowed you to camp in their grounds and we had our own outdoor bath. Even though the resident little boy would not go until you took your towel off and entered the waters. Hopefully he will grow out of that soon!

After the national park we spent some time along the east Rift Valley but the road was a tad boring so we decided to cross over back to the coast. The rural road was stunning. The Formosa macaque monkeys barked as we approached their swinging territory, birds sang choruses and we both said how intense the tropical forest was. China’s forests were silent. There, at night, when we camped by woodlands or forests we never heard animal noises; it was only later that we heard from an Indian and Chinese ecologists that china had eaten almost all its wildlife! But here in Taiwan things were loud and alive.

During the east coast section we met several cyclists, mostly Taiwanese who could shout encouragement to us. We cycled a little with a German couple, Moritz and Diana, who had come from Japan cycling so it was good to exchange travel tips. Kim from London was cycling for a couple weeks here and we shared a breakfast talking bike touring and discovering commonality of design/typography and knowing Martha (one of my ex students). On one of our 7-eleven (they are everywhere) stops we collided with 30 people on a arranged 10 day circumnavigation of the island organised by Giant. Many photographs were taken and we were given hydration sachets, salt sweets and biscuits to aid our trip. 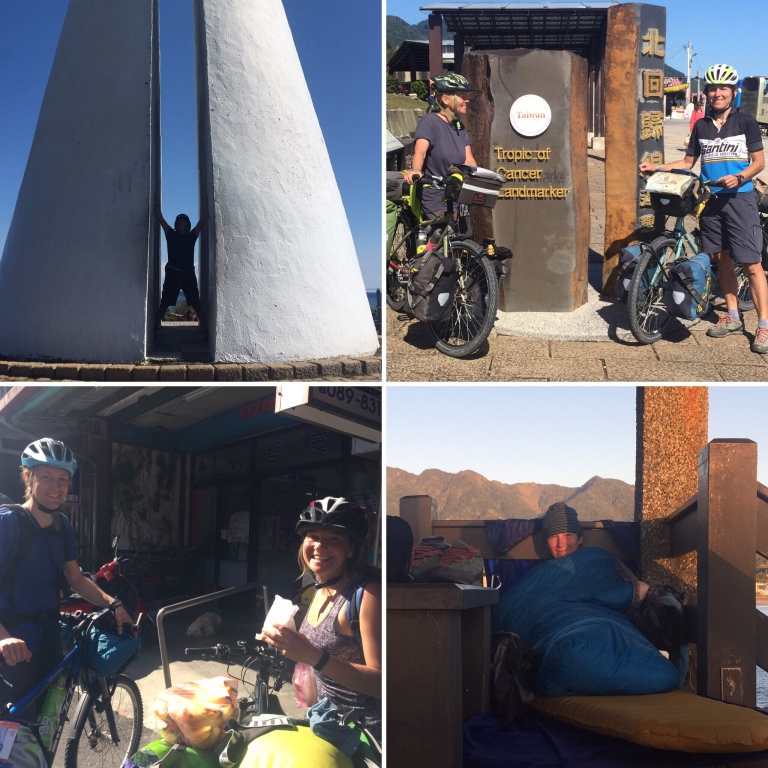 Over the past 4 weeks we have camped 90% of the time from wild (free) camping spots to paid campsites. These range from almost luxury camping with raised A frame platforms and roofs to sites made from old rusty metal and ramble shackled bathrooms to even the grounds of a school playing field. In fact the one we are on now includes breakfast. A fried egg, cucumber, toast and coffee were on offer this morning to our surprise. Since we left Greece in June 2017 we have not come across an official campsite so having the choice here has been great. Prices have ranged from £0-£6 up to £20 (for 2). Which is the cheapest option as hotels/hostels are the biggest cost so it has been great not to fork out for the comfort of a bed too often! 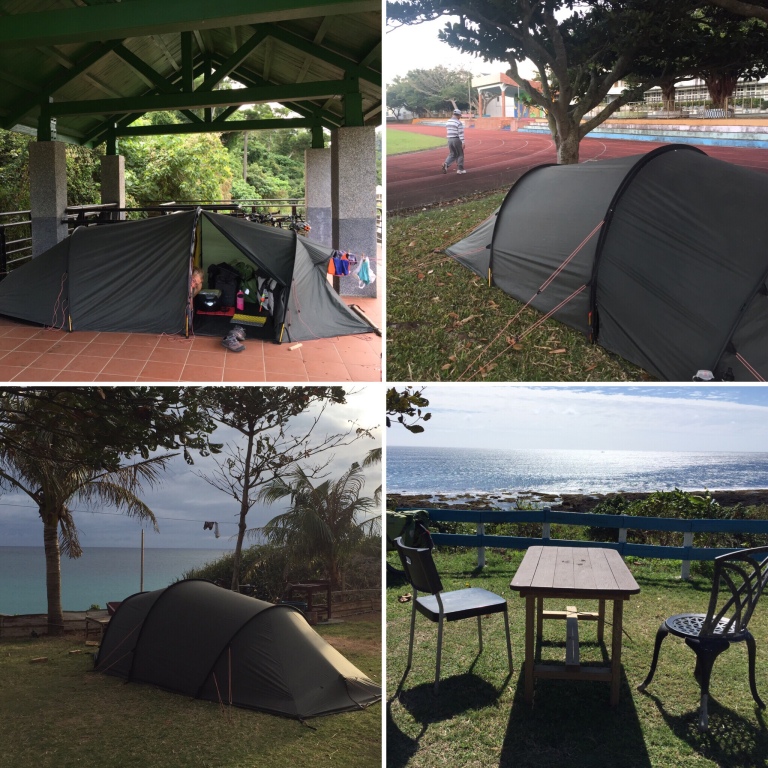 We have just spent 2 great days on a tiny island Liuqiu, just off the south west coast. It’s about 12km around so you could do many laps in 1 day. The most amazing thing are the green sea turtles which you can see at many beach or cliff stops. This became our main past time spotting turtles. On the first evening I was lucky enough to see them very close and watched them forge on marine weeds for ages. Barbara enjoyed beach-combing and clearing up some beaches of plastic.

Tomorrow we will take the short ferry back to the main land and begin a weaving journey north on local hill/mountain roads. The cyclists we have met have all suggested we avoid the route 1 as it’s busy, polluted and industrial. We will leave the comfort of warm weather as the mountains will be cold, perhaps rainy and certainly hilly. We wonder what further treasures Taiwan will hold as we cycle the next 400-500km.

We will hopefully be visiting 2 paper workshop/museums before leaving Taiwan and that will be our second and final post before we depart for Japan. 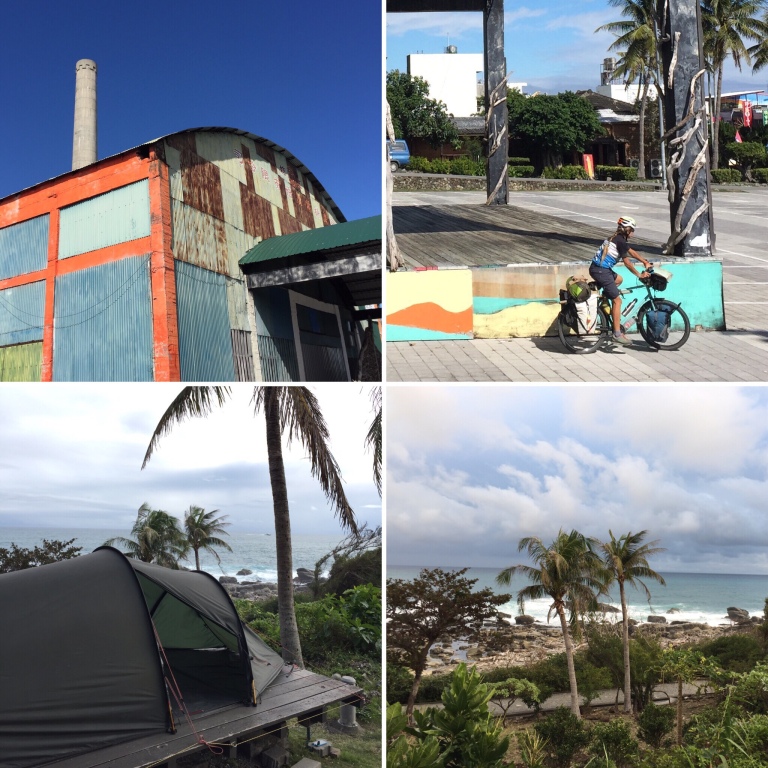 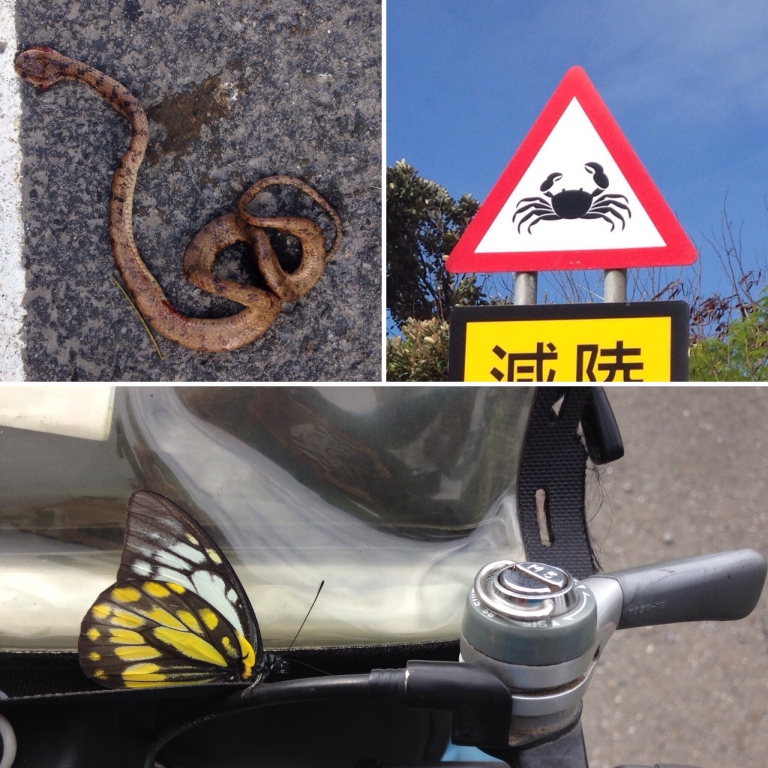